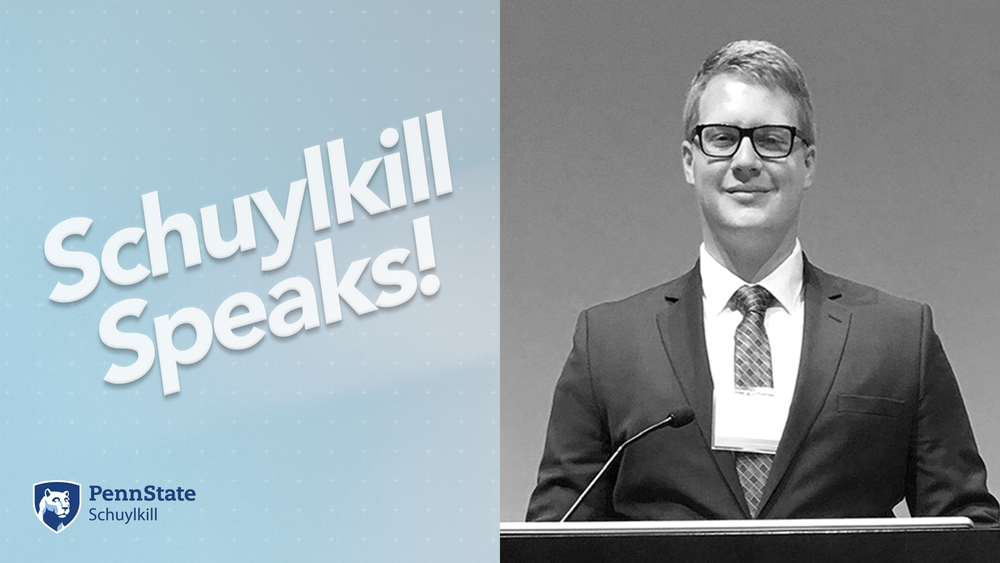 SCHUYLKILL, Pa. — Eric Thompson wears many hats. He is a biology scholar, soon-to-be med student, dedicated community serviceperson, pediatric cancer survivor, president of several clubs, student-athlete — the list is extensive. This senior biology major had experienced so much in his lifetime before coming to Penn State Schuylkill, and his ambition has only grown.

This fall, Thompson will begin his M.D. program at Thomas Jefferson University’s Sidney Kimmel Medical College, where he endeavors to train in public health with an emphasis on pediatrics or pediatric oncology. After three years at Penn State Schuylkill, Eric has taken a deep dive into THON, community service, the biology program, and hands-on research.

Lucas Redmond, assistant professor of biology, welcomed Thompson to his gray catbird research team, and especially enjoyed having him in class. “Eric’s inquisitive mind and very impressive level of understanding of biology allows him to draw connections and ask questions that always kept me on my toes. Eric's presence almost always resulted in an increase in the level of discourse during class to the benefit of all parties involved, myself included,” he said.

Graduating a year early, Thompson made outstanding contributions to the Schuylkill campus during his time there. At Schuylkill’s Academic Program Awards ceremony hosted this spring, he earned his honors cords as well as a tutor certificate. Eric is also a member of Theta Chi Theta, Penn State Schuylkill’s chapter of Beta Beta Beta, the national biological honor society, and was inducted into Gamma Beta Phi, the community service honor society, and Chi Alpha Sigma, the college athlete honor society.

As he nears the end of his undergraduate career, Thompson sat down to reminisce with the Schuylkill Speaks series about his past, and consider his future.

Q: Now that you’re almost done with your undergraduate career at Penn State Schuylkill, what do you think you enjoyed most about your time here?

Thompson: I appreciate the different professors I’ve worked with and how I’ve been able to develop relationships with them. I did Gray Catbird research with Dr. Redmond. It’s been worthwhile to work with him, and it’s not easy to be selected as a student researcher with your own project. You have to show interest, knowledge, and he has to approve your project. I did a lab with him as an honors option in my freshman year, and we hit it off. I began field research that summer. I was even able to present my research in Memphis at the St. Jude Research Hospital and at two national ornithology conferences in Anchorage and Cape May.

Q: It's great that you were able to do undergraduate research. Are you hoping to continue that in your graduate career?

Thompson: In medical school, research is built in as part of my program. I’m debating between something in population health or clinical translational research. I got to know Shenandoah, Pennsylvania, well with my classmate Melissa Ramirez, and there’s a large discrepancy in medical care between where campus is located and the northern part of the county. Melissa helps translate concerns of Spanish-speaking citizens about their health when they visit Shenandoah’s health clinics. There are many different reasons why someone won’t see a doctor, and language barriers are a big one. The only way to fix that is to have physicians who can speak multiple languages. I didn’t have any thoughts about public health at all when I came to Schuylkill and started in biology, but I am considering getting a master’s in public health at Thomas Jefferson.

Q: Why did you choose Thomas Jefferson University as your medical school?

Thompson: The school has always been my top choice of the schools I applied to. I was accepted into the Sidney Kimmel Medical College at Jefferson and I’m really interested in their Physicians Shortage Area Program. In Pennsylvania specifically, there are health clinics and personal practices instead of hospitals in rural areas. I’ll be an M.D. when I graduate, and those are the areas I’d like to advocate for. Ultimately, I think I want to practice pediatrics or pediatric oncology.

Q: Can you tell us a bit about your own experience with cancer?

Thompson: I was diagnosed with lymphoma in January of my ninth-grade year at Blue Mountain High School. I had even played football the fall before I got my diagnosis. I went to my parents when I noticed a lump in my neck. After multiple months of testing, I was diagnosed with Hodgkin’s Lymphoma. I went through six months of treatment — chemotherapy and radiation — at CHOP [Children’s Hospital of Philadelphia]. I still keep in contact with my oncologists to this day.

I remember noticing I was losing my hair while I was playing video games one day. People wanted to shave their heads for me, but I thought that it was a rather odd form of support. Sometimes I felt really alone. Parents can’t be there all the time. It was difficult, but I managed to continue attending classes throughout treatment. I remember watching a lot of Fresh Prince while I received my different bags of chemotherapy. After I completed my chemotherapy, I had 30 straight days of radiation on multiple different machines. Each day took nearly 6 hours between driving to and from Philadelphia and actually being in the hospital. A week before my sophomore year of high school began, I was told I was officially cancer free.

Later, my experience helped me relate to others who were going through cancer. Andrea Solinski, a breast cancer survivor and Penn State Schuylkill’s lab supervisor, and I talked a lot while she was going through treatment. It’s a lot of mundane stuff no one really thinks or talks about, like you start losing feeling in your limbs. Sometimes it’s just nice to complain. I’m not really offering much but understanding. I know what it’s like to feel isolated during treatment.

Q: Did your experience provoke you to get involved with Schuylkill Benefitting THON?

Thompson: Yes, definitely. I was the campus’s family relations officer, so my job was to maintain contact with families through Facebook and texting. We involved the families as much as they wanted to be involved. We’d take them bowling or go to a trampoline park. I’d help coordinate the types of events we’d do with the families, including things as simple as movie and game nights.

THON opened me up to my current friend group, too. I remember my first day of class — my first day of college, even — I was taking organic chemistry. When we introduced ourselves to each other, I said I was interested in pediatric oncology. After class, Marla Stoner, who has since graduated but was a Schuylkill Benefitting THON officer at the time, approached me and asked if I’d like to join the club. The rest is history. 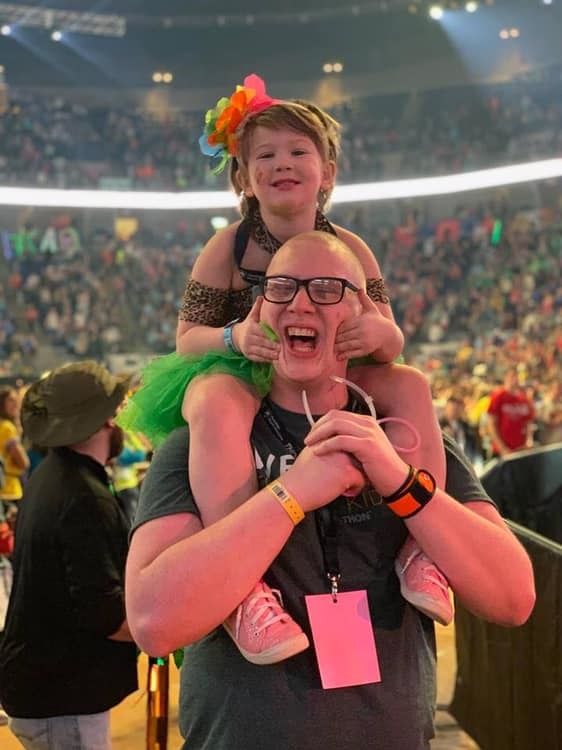 Senior Eric Thompson has been inspired by and heavily involved in THON. For the 2020 THON weekend, Eric was voted as one of Penn State Schuylkill's official dancers for the 46-hour dance marathon. Here, he poses with Schuylkill Benefitting THON kid Devon Pulaski, a cancer survivor.

Q: What are some final thoughts you have about the biology program at Schuylkill?

Thompson: I’m a member of TriBeta, the national biological honor society, and you get to go on trips and learn. But you also get to form close relationships with other students and faculty members in your major. We’d go on trips, help Admissions with their STEM meet-and-greets — we’d just try to get people involved.

I’ve had a lot of support from Dr. Kelly Puzzi [assistant teaching professor]. She helped me ensure I was able to take all of my prerequisites for medical school. Dr. Lee Silverberg, associate professor of chemistry, also offered to hold an independent study in organic chemistry if I needed the course. And when I had to miss class for medical school interviews, all of my instructors were very understanding. It’s very easy to fall behind in class with professors who are unwilling to work with you, but everyone at Penn State Schuylkill was very understanding.

I’m grateful because the faculty made sure myself and others had every opportunity to succeed.