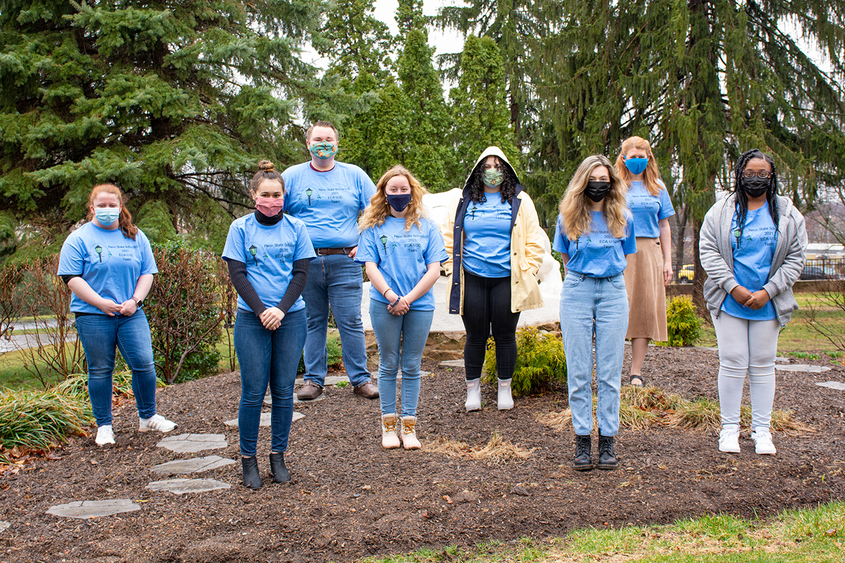 Valerie Schrader, associate professor of communication arts and sciences, and Honors Program coordinator, said this year’s campus representation at the conference bettered their previous record from 2017, when eight students and 10 projects were accepted.

The 2021 Penn State Schuylkill ECA-USC team consisted of all Honors Program students majoring in various disciplines: STEM, social sciences, and, of course, communication. Several also are completing the communication arts and sciences minor. Students conducted their research in an honors class, honors option or independent study, and workshopped their projects with other students, Schrader, and Janelle Gruber, lecturer of corporate communication, who helped them design their posters and PowerPoint slides.

To be accepted to the conference, student submissions undergo a blind review process conducted by communication faculty and doctoral students from across the Eastern United States. Conference submissions may be accepted in the form of a poster requiring a short presentation, or a paper — which requires a lengthier presentation in front of a panel with three or four other undergraduate scholars, a faculty chair and a respondent.

Sophia Bates is a sophomore majoring in biology with a minor in communication arts and sciences and has been a member of the Honors Program for two years. Her paper, “Don’t Stop Me Now: A Rhetorical Analysis of Public Memory in the 2018 Biographical Film 'Bohemian Rhapsody,'" was completed during the spring 2020 semester.

Corinne Ellis is a junior majoring in corporate communication with a minor in communication arts and sciences. Ellis has been a member of the Honors Program for three years and is vice president of the Alpha Epsilon Lambda chapter of Lambda Pi Eta (national communication honors society). Her poster proposal, "'Razzle Dazzle 'Em: A Rhetorical Analysis of Facework in the Musical 'Chicago,'" was accepted for the conference. Ellis previously presented this at the campus's poster conference and received runner-up for the Library Research Award.

Dominique Hughes is a sophomore majoring in corporate communication with a minor in communication arts and sciences and has been part of the Honors Program since transferring to Penn State Schuylkill in fall 2020. Her paper, "Remembering Harriet Tubman: A Rhetorical Analysis of the 2019 Film 'Harriet' through Public Memory," was completed in fall 2020. Dominique will also be presenting this project at the Penn State Undergraduate Research Exhibition this year.

Lexi Johns is a junior majoring in biology and a member of the Honors Program for three years. She completed her paper, "A Burning Ghost Town or a Fun, 'Safe' Place for the Family?: A Rhetorical Analysis of Centralia," during spring 2020. Johns also presented at last semester's campus poster conference and was selected as one of the Library Research Award winners.

Sunnie Jones is a sophomore double-majoring in psychology and communication arts and sciences and serves as treasurer of the Penn State Schuylkill Honor Society. Jones had two submissions accepted to the ECA conference this year. Her poster proposal, "Pursue the Truth; and Learn Something New: Uncertainty Reduction Theory in the Musical 'Kinky Boots,'" is based on a project completed spring 2020, and her paper, “When Hands Touch and its Impact on the Public Memory of World War II," was completed in a spring 2020 honors humanities class.

Adam Moyer is a senior majoring in corporate communication with a minor in communication arts & sciences. Moyer is president of the Penn State Schuylkill Honor Society and secretary of the Lambda Pi Eta chapter. He had two papers accepted to ECA-USC this year: "Activism through Song: Herbert W. Simons’ Social Movement Rhetoric Strategies and the Music of Woody Guthrie," completed in fall 2019, and "Education in the Time of Coronavirus: An Autoethnographic Study of an Undergraduate Student’s Experiences in the Era of COVID-19," completed as an independent study last semester. These represent Moyer's third and fourth conference presentations this year. At the Ohio Communication Association, he presented his research on the musical "Kinky Boots," and at the National Communication Association, he presented research on "Chicago." The latter received an Honorable Mention Award at the Top Student Paper Panel of the Theatre, Film, and New Multi-Media Division.

Hayley Salen is a first-year honors student majoring in psychology with a minor in communications arts and sciences. Her poster proposal is entitled "'Change Don't Come Easy:' Public Memory in the Musical 'Memphis.'" Salen and Poetic Session (see below) are the first Penn State Schuylkill first-year students to have their work accepted to the conference.

Poetic Session is a first-year honors student majoring in psychology, with a minor in communication arts and sciences. Her poster proposal, "The Two Faces of Jervis Pendleton: A Rhetorical Analysis of Facework in the Musical, 'Daddy Long Legs,'" was accepted to the conference. Session formulated her project outside of class and participated in the peer workshops to further develop her poster proposal, and is currently finishing the project as part of a communication honors class.

Madison Throne is a sophomore electrical engineering major with a minor in Spanish who has been part of the honors program for two years. Throne's paper, "Can You Feel the Emotion?: Burkean Identification in the Musical 'Kinky Boots,'" was completed during the Spring 2020 semester. Throne is the president and founder of the Penn State Schuylkill Technology and Engineering Collegiate Association (TEECA) club.

Cassandra Ward is a sophomore majoring in corporate communication with a communication arts and sciences minor. This is her second year in the honors program. Ward had two research projects accepted to ECA-USC this year: her poster “Let Love Shine: Rawlins’ Relational Dialectics and Friendship in the Musical 'Kinky Boots,'" and a paper, “Talk Less, Smile More?: Rawlins’ Relational Dialectic of Expressiveness and Protectiveness in the Musical 'Hamilton,'" completed in fall 2020.

Courtney Weikel is a junior majoring in corporate communication with minors in business and communication arts and sciences. She also serves as vice president of the Penn State Schuylkill Honor Society. Her paper "Connecting with and Learning from Meg, Jo, Beth, and Amy: Public Memory, Burkean Identification and the 2019 Film 'Little Women,'" was completed as part of a spring 2021 Honors humanities class and marks her fourth conference presentation this year. At the Ohio Communication Association, she presented two papers, one of which received a Top Undergraduate Paper Award. At the National Communication Association, she received an Honorable Mention Award at the Top Student Paper Panel of the Theatre, Film, and New Multi-Media Division.

Schrader speaks to some impressive statistics: Out of 125 total submissions, only 25 papers, 16 posters and one panel proposal were accepted, for a 33.6% acceptance rate. Penn State Schuylkill student submissions counted for nine of the 25 papers and five of the 16 posters accepted.

“It was a very competitive conference,” said Schrader, “and the Schuylkill students did extraordinarily well. Not only were their projects excellent examples of undergraduate scholarship, but they were among the most active participants at the conference — attending panels, asking questions, and supporting one another's presentations. They were model representatives of the campus and the University, and I am so incredibly proud of them.”

For more information about academic programs other scholarly opportunities available at Penn State Schuylkill, visit online or contact the Office of Admission at 570-385-6252.