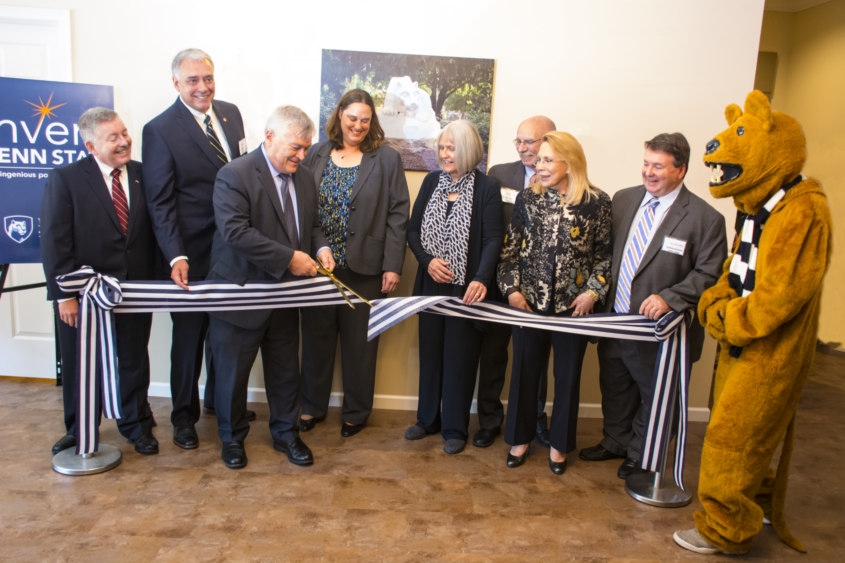 SCHUYLKILL HAVEN, Pa. — The doors of opportunity are now open for individuals in Schuylkill County who want to start or grow a business. LionLaunch is Penn State Schuylkill’s community-based entrepreneurship program that is funded by Invent Penn State, a Commonwealth-wide initiative to spur economic development, job creation and student career success.

“From start-up funds for entrepreneurs and new businesses, to workshops on growing and strengthening businesses, to mentorship, LionLaunch will serve the needs of the region, our students, faculty and staff,” Barron said.

Darcy L. Medica, interim chancellor of Penn State Schuylkill, outlined the three components of the LionLaunch program: a boot camp, a ten-week program to assist and mentor budding entrepreneurs; a business plan competition for start-up funds or business expansion; and the opening of a facility for working, networking and meeting space.

Penn State Schuylkill already hosted its first LionLaunch business plan competition. Among those who competed for and won seed money to grow or start their small businesses were a one-stop online shopping experience for car enthusiasts, an archery range, and an entrepreneur who artistically fashions recycled soda tab cans into beautiful handbags.

Looking to the future, Medica said, “We plan to host business and community events and workshops in this space to facilitate and develop an expanded ecosystem of entrepreneurship in Schuylkill County.”

Emphasizing that people are the key, Barron stated, “We believe we can do even more for this region through partnerships and strategic investments that expand existing relationships with legislators, area businesses and community leaders.”

Tobash, the emcee of the inaugural LionLaunch business plan competition, said, “We love the ingenious power of partnership.” He underscored the important connection between business and education, remarking, “The ability to bring this into our communities and offer experiential learning through an outstanding university — a leader in research, education and athletics like Penn State — really makes this program work.”

For more information about Invent Penn State, go to invent.psu.edu. To learn more about the LionLaunch program, visit sl.psu.edu/lionlaunch.