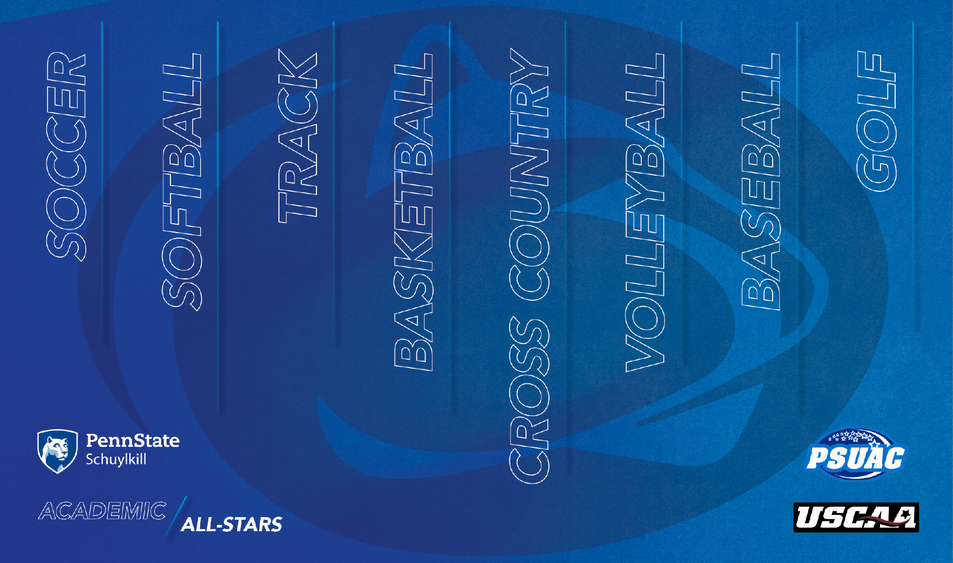 The USCAA recognized the following individual spring 2021 athletes by naming them to its National All-Academic team. These student-athletes maintained an overall (cumulative) GPA of 3.5 or greater.

Close to one in four students on the Penn State Schuylkill campus identify as participating on one or more intercollegiate teams, and 40% of these student-athletes earned a 3.5 GPA or higher for the spring 2021 semester.

For spring 2021, the overall GPA for all Penn State Schuylkill student-athletes was 3.36, with men’s baseball, co-ed cross country-track, and women’s softball contributing the highest GPA totals. Seven of eight teams earned a 3.2 GPA or better.

Additionally, over 50 student-athletes were recognized by the Pennsylvania State University Athletic Conference (PSUAC) for their academic accomplishments, earning a 3.0 or higher GPA, and a spot on the PSUAC All-Academic Team.

The PSUAC has recognized that the COVID-19 pandemic has impacted hundreds of student-athletes and stripped them of the opportunity to compete for All-Conference, All-American, and National Championship recognition, prompting the PSUAC's Tournament and Awards Committee to name an All-Senior Team for fall 2021.

Additionally, the PSUAC recognized a John Fritz Sportsmanship Award honoree from each campus for outstanding leadership and actions during their time as a student-athlete.

If you are a student-athlete interested in learning more about the Penn State Schuylkill athletics program, including opportunities to compete nationally through campus membership in the NAIA, contact Kayla Felty, coordinator of athletic recruiting and eligibility, at [email protected].