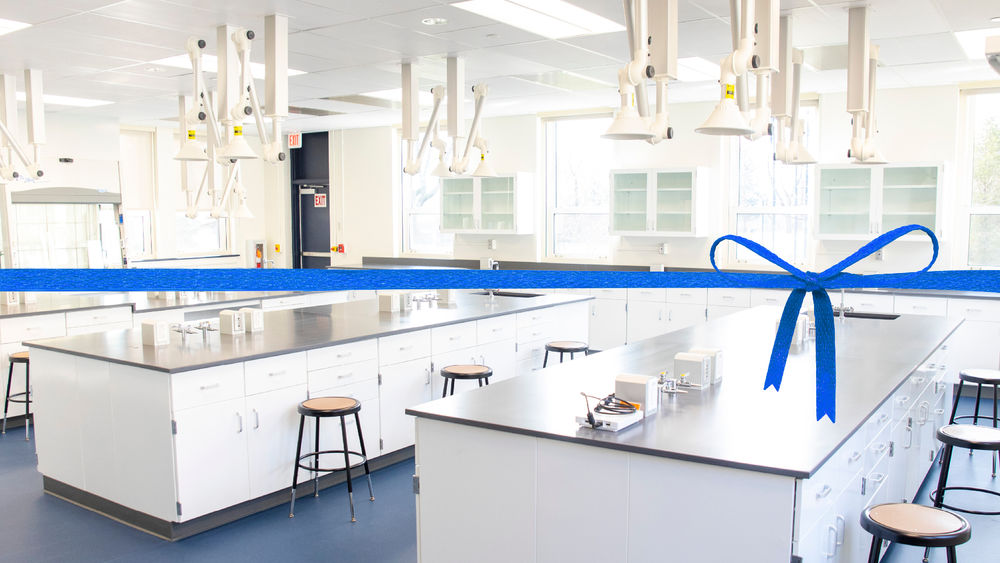 A recently completed $3.5 million renovation of science laboratories at Penn State Schuylkill has opened a world of possibilities for student scientists and faculty researchers alike. The project included the creation of completely new organic chemistry and general chemistry laboratories, an updated radiological science lab and the acquisition of leading-edge equipment and instrumentation.

The project included the creation of completely new organic chemistry and general chemistry laboratories totaling 2,720 square feet, an updated radiological science lab of more than 1,000 square feet, and the acquisition of leading-edge equipment and instrumentation in those labs as well as in the physics lab.

Penn State Schuylkill Chancellor Patrick M. Jones said, “These improvements were made possible through the philanthropic support of many friends of Penn State Schuylkill. Thank you to our donors for your generosity and partnership in helping us educate the next generation of scientists and healthcare workers. Because of you, they will learn in modern laboratories with the latest equipment.”

Jim Zigmant, president of the John E. Morgan Foundation, the project’s lead donor, said, “Penn State Schuylkill does a lot for the county, and we are delighted to be able to help advance the mission and work of the campus. It is also the foundation’s honor to be able to continue Mr. Morgan’s legacy, one that includes the naming of the campus’ John E. Morgan Auditorium and student scholarship support. Despite never having an opportunity to attend college, Mr. Morgan placed an emphasis on higher education. Although he avoided publicity himself, the Morgan Foundation hopes that others might be inspired by his philanthropy.”

“With access to these incredible new spaces and equipment," said Medica, "Penn State Schuylkill students will be better positioned to conduct world-class research with faculty and learn hands-on skills that will serve them well for future graduate school and workplace opportunities.”

The most substantial updates of the renovation project were the construction of new organic and general chemistry laboratories.

The new general chemistry lab offers workspaces for 24 students. Above every lab station is a localized overhead ventilation system known as a snorkel. The lab also features a white board and projector so faculty members can seamlessly integrate lecture and lab spaces. 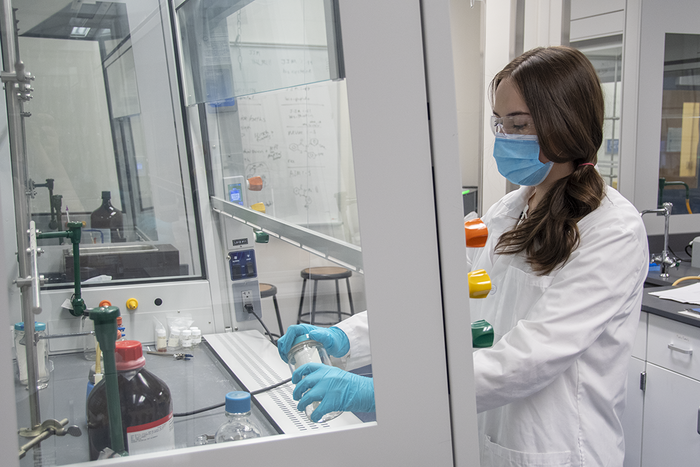 Penn State Schuylkill sophomore Grace Muench is already taking full advantage of the brand new organic chemistry lab. Here, she is checking in on an experiment and tracking ongoing research.

Sophomore biology student Grace Muench is one of five students currently working alongside Silverberg on heterocyclic organic chemistry research, and she said she aspires to attend medical school and become a physician after graduating from Penn State. Upon seeing the new labs for the first time, Muench reflected, "It was hard to believe that it was our lab. Everything is brand new and state-of-the-art. The environment for me is more conducive for learning and researching. The new equipment and clean space make me want to spend even more time in the lab than I already do."

The renovated radiological sciences lab features new, energized, fully digital equipment — a radiographic unit with direct digital recording capabilities for imaging labs that includes an X-ray tube, table and control panel, and a C-arm, which is the type of machine used in operating rooms.

As part of the renovation the program also acquired a new, full-body, take-apart, PIXY phantom simulated patient, allowing students to practice positioning and see the effects of imaging on various body parts.

“All of these hands-on experiences prepare our students to succeed from day one in the workplace,” said Hilary Yotko, lecturer and program coordinator for Penn State Schuylkill's radiological sciences program. 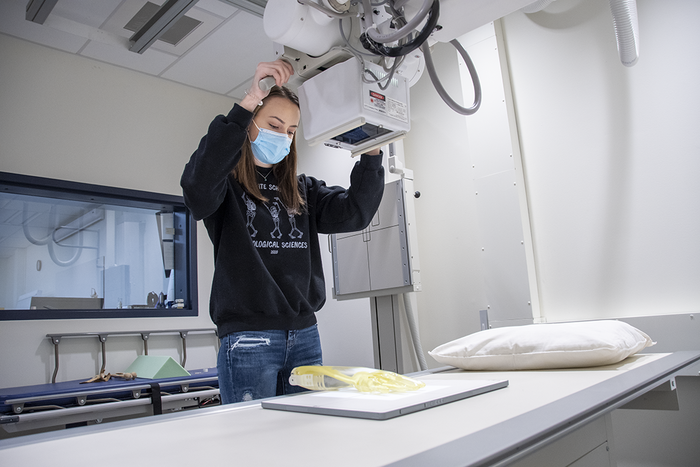 Freshman Radiological Sciences student Kalista Miller uses one of the new and fully digitized radiographic units to examine a model of an arm.

Kalista Miller, a freshman radiological sciences major, has been working in the renovated lab this semester.

“The new equipment is so smooth and effortless to maneuver, which makes not only me but my fellow students more confident when practicing," said Miller. "We appreciate the opportunity to work in the new lab because it makes us better students and prepares us for the real world of X-ray.”

Upgrades to the physics lab focus on new software and equipment with features such as wireless sensors that allow students to manipulate experiments and record data without potentially becoming tangled in wires. Additional equipment includes a charge-to-mass-ratio electron experiment, a Van de Graaff generator, a vacuum/pressure pump, a bell jar, and two powerful new telescopes:

Michael Gallis, associate professor of physics, explained, “One of the greatest features of these upgrades for our students is being able to touch the foundations of physics in introductory courses.” 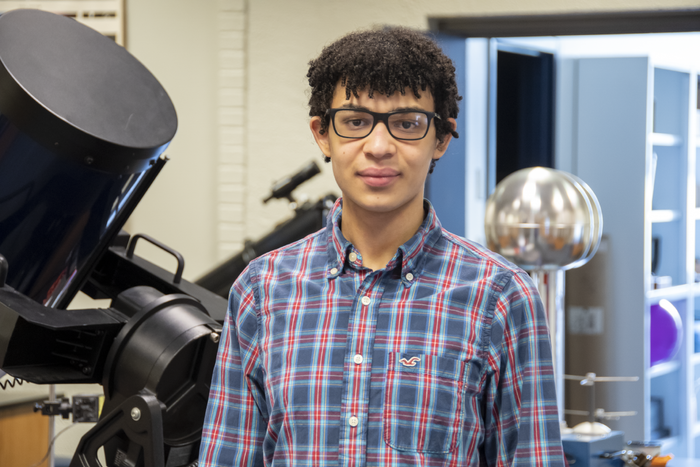 Penn State Schuylkill sophomore Michael Johson-Ponce stands among some of the new physics equipment he has helped commission.

“The experiment uses a piece of equipment called a ‘gravitational torsion balance.’ My first thought when looking at the apparatus was ‘how in the world is this supposed to work?’" said Johnson-Ponce. "It took a lot of re-reading the procedure to get my bearings, but in the end, I was glad to have been able to use the equipment. It was a really nice opportunity for me to experiment with something challenging.”

The campus held a virtual ribbon-cutting ceremony at noon today (April 19), which will be available for viewing afterward at this link. The ceremony includes remarks from campus leadership, student highlights, and tours of all three updated lab spaces.

Support for this renovation advances "A Greater Penn State for 21st Century Excellence," a focused campaign that seeks to elevate Penn State’s position as a leading public university in a world defined by rapid change and global connections. With the support of alumni and friends, “A Greater Penn State” seeks to fulfill the three key imperatives of a 21st-century public university: keeping the doors to higher education open to hardworking students regardless of financial well-being; creating transformative experiences that go beyond the classroom; and impacting the world by serving communities and fueling discovery, innovation and entrepreneurship. To learn more about “A Greater Penn State for 21st-Century Excellence,” visit greaterpennstate.psu.edu. 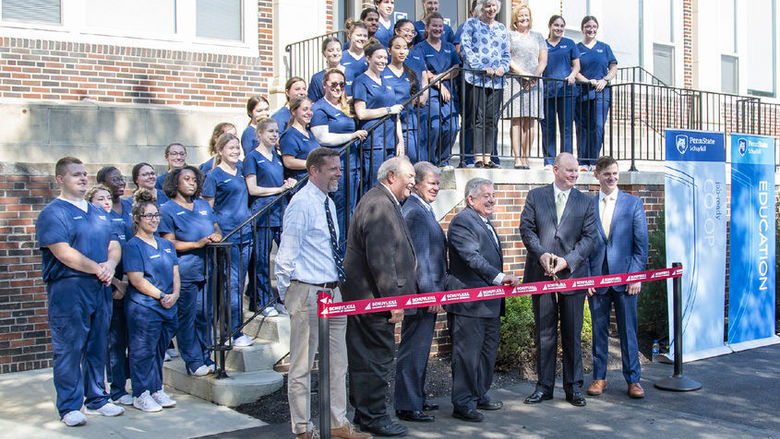 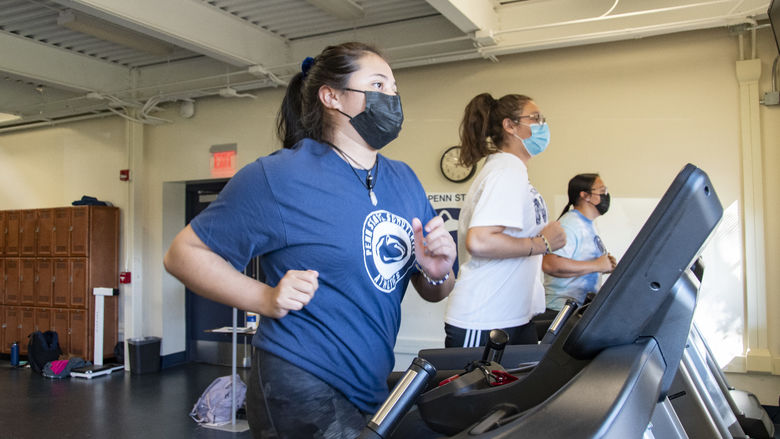 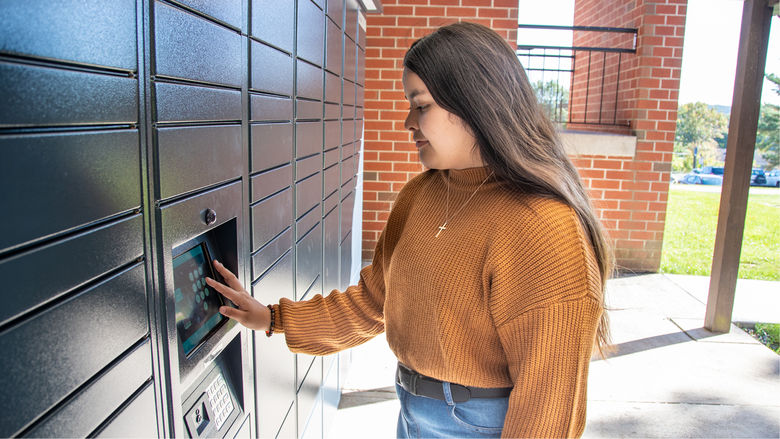 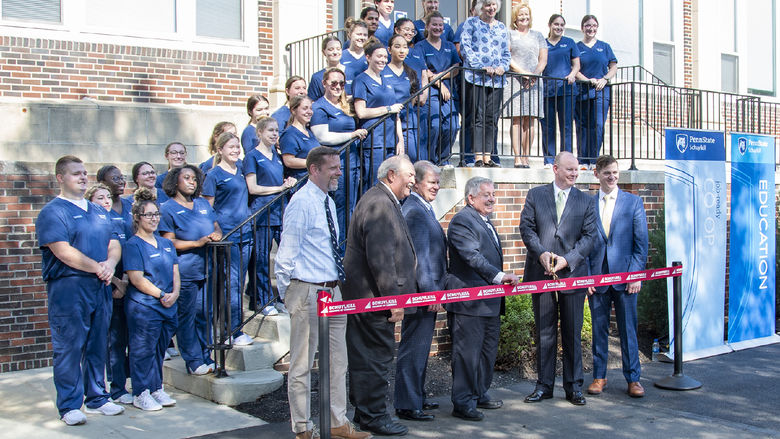 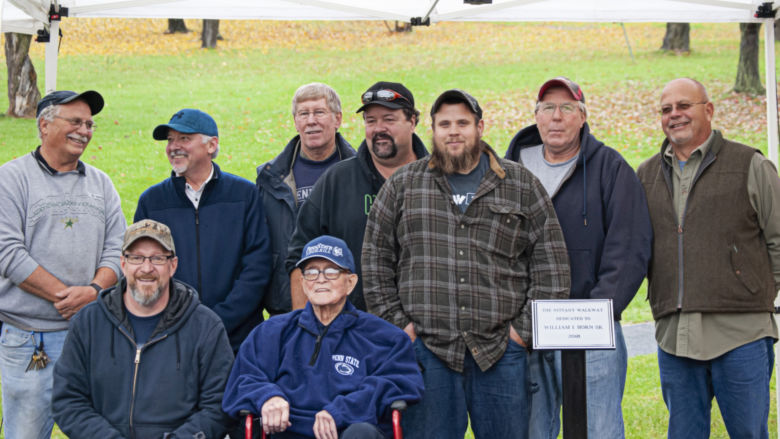