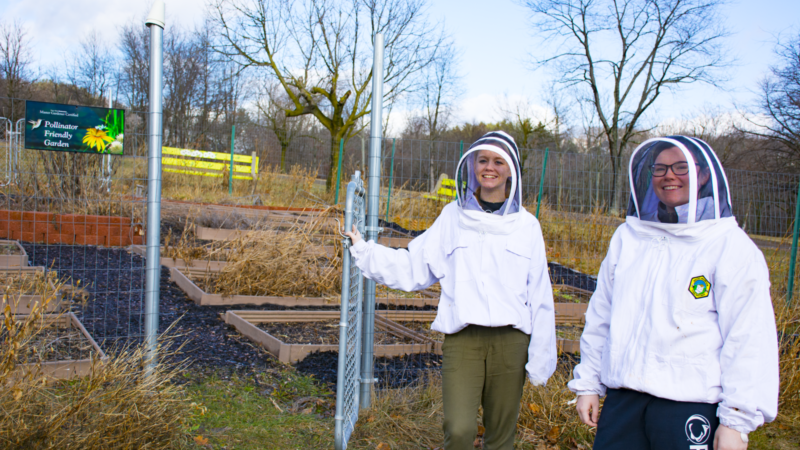 New experiences inspire new understandings that often lead to an unexpected egress in the road ahead.
By: Susan C. Andrews

“Overwhelmed, that’s how we felt when we first arrived at this year’s National Entomological Society of America Conference, but overall the opportunity was a great experience,” said Penn State Schuylkill student Alyssa Hatter.

Hatter, along with longtime friend and fellow classmate Marla Stoner, presented their honey bee research during a poster session.

The annual conference facilitates the exchange of information, expertise and experiences among scientists studying insects, including honey bees.

According to the students, the bees are the buzz. Thirteen sections of the conference were devoted to honey bee research.

“I am very proud of Marla and Alyssa,” said Brenna Traver, assistant professor of biology at Penn State Schuylkill and their faculty advisor. Hatter and Stoner are two of her four undergraduate researchers in her lab studying Nosema spp., an intestinal pathogen found in both managed and feral honey bee colonies. “They are co-authoring a paper on their research with the aim of being published in a national science journal.”

Honey bees, declining at a rate of 38 percent annually, are among the primary pollinators that produce much of the food that humans rely on to sustain a healthy diet. According to Traver, pathogens including Nosema spp., parasites, pesticides and poor nutrition are contributing to epic colony losses.

The Nosema spp. pathogens may be detected in the abdomen of the worker honey bee, which is the female of the species, Hatter and Stoner said, almost in unison. Often finishing each other’s sentences, the duo added that the worker bees are responsible for hive productivity while the male honey bees’ chief role is reproduction.

The DNA in the honey bees’ abdomens is examined for Nosema spp. by a qPCR (quantitative polymerase chain reaction) machine, which uses fluorescent probes that bind to the DNA if Nosema spp. is present.

“We hypothesized that feral bee colonies would have greater resilience to the Nosema spp. pathogen than managed colonies as they are an older species,” Stoner explained. “But this was not the case from our findings with a somewhat limited sample size. Ideally, we would have collected a larger sample size than five managed and 13 feral colonies.”

The students collected the honey bee colonies at the Powdermill Nature Reserve in Rector, Pennsylvania, near Pittsburgh, in June. They spent several days at the reserve working under the direction of the nature reserve’s director, John Wenzel.

“In the morning, we would suit up, glove up and prepare the smoker for the managed bee colonies,” Hatter said. “We would complete the paperwork in the morning and then spend the afternoon conducting field research,” Stoner concluded.

Given two GPS coordinates from previous research studies, Hatter and Stoner would hop in their car with bee suits in tow. Hatter said one of their first stops was the beautiful farm of a retired couple. “Their hobby was beekeeping and they sold honey locally.”

They collected feral bees at the couple’s farm and at other stops during the trip using large mesh nets. They explained that the bee hives are often located on the base of a tree, and in this case the hive was about five feet up on a walnut tree. Stoner added, “The bees are normally found in a tree cavity with a two-gallon capacity.”

They would catch honey bees either coming in or going out of the hives. “The honey bees would swarm in a gaggle, and it was like catching butterflies as we swooped up with the net,” Stoner said.

“We never knew if we would end up at somebody’s house or farm or what we might find similar to a scavenger hunt,” Stoner said. “Once our GPS coordinates took us to a fancy golf course where rain was coming down in straight buckets.” A safe distance from the fairway, they found a hive that had been around for an estimated 30 years.

The honey bees were collected in vials and put on dry ice and later distributed to three research centers, including Traver’s lab.

The honey bee research in Pittsburgh and the national conference in Denver together served as confidence builders for the young research team. “We enjoyed networking and learning about other honey bee research projects,” Hatter said. “Everyone was brilliant.”

New experiences inspire new understandings that often lead to an unexpected egress in the road ahead. The two initially planned on pursuing careers as physician assistants. Now, they believe research is their future. One is interested in medical research while the other may pursue her passion for the environment. 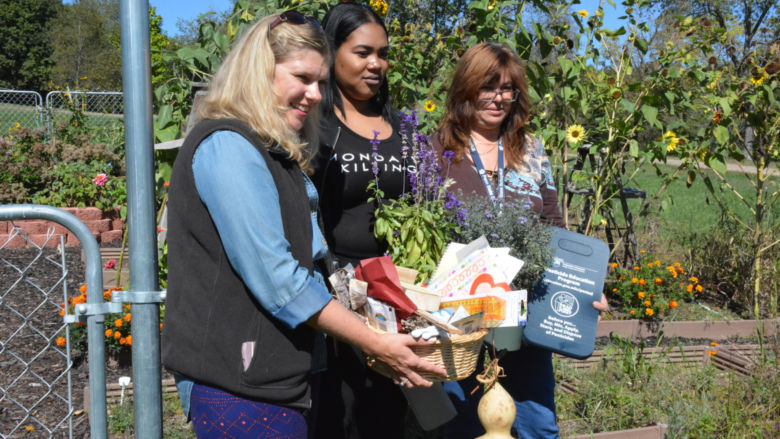