From Schuylkill County to Hollywood, via Penn State

Nick Shugars is a publicist in global publicity at Warner Bros. Pictures in Burbank, California. He is also a 2015 graduate of Penn State’s Donald P. Bellisario College of Communications via the 2+2 program that saw his academic career launch at Penn State Schuylkill. 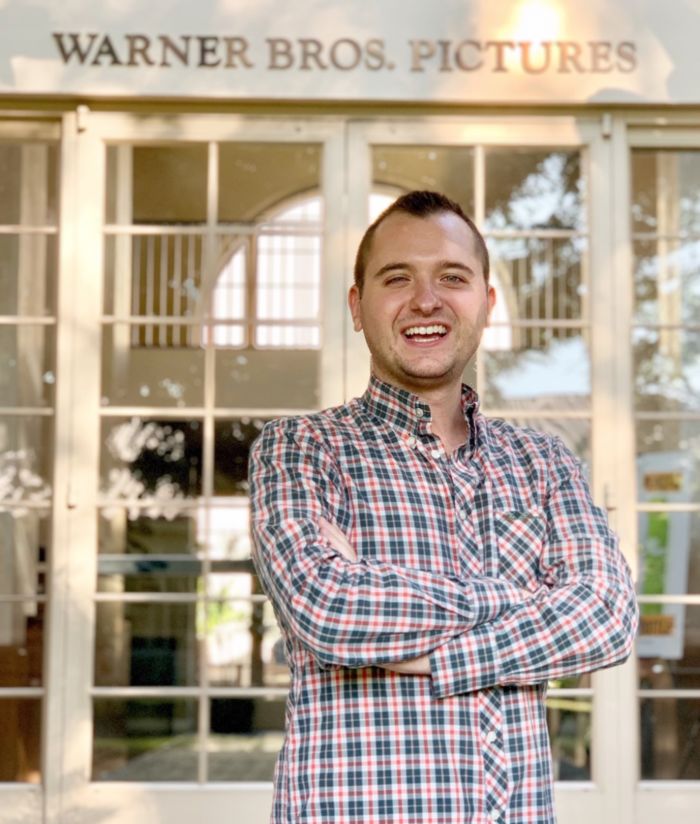 Last fall, Shugars stopped by his old stomping grounds on the Schuylkill campus to talk with current students about his Hollywood work life, his journey getting there, and how his own experiences have translated into sage career advice for new job searchers.

A Pine Grove, Pennsylvania, native, Shugars was certain that Los Angeles was where he was meant to be, so he designed his academic path with an eye on a film production career. He began his journey at Penn State Schuylkill in corporate communication for the first half of the 2+2 program. During those two years, Shugars was heavily involved in campus life. He was a Lion Ambassador student tour guide and a member of Penn State Schuylkill’s THON chapter – experiences that helped him gain marketable skills that would serve him well in his professional life.

He credits Cathy Fiorillo, associate professor of theater and speech, as being a significant influence on his life and career successes. “She helped me perfect my public speaking skills,” he said. “She always believed in me and my dreams, and I respect everything she's taught me.”

How to succeed in business

Upon graduation, Shugars headed to Los Angeles with little more than his vehicle, the few belongings that fit inside, and an unpaid internship waiting for him when he got there. But Shugars' new life got off to a rough start when his car broke down soon after arriving in his new city, leaving him with a hefty repair bill and stranded on his friend’s couch.

“Everyone always tells me how lucky I am for living in Los Angeles and for having a dream job at Warner Bros., but luck is the last thing I think of when I look at where I am today,” Shugars reflected. “There was a lot of blood, sweat and tears that went into establishing myself in a new city, and the first two years were not easy. After a few months in, I started to question my decision. But my dream and my goal never died. I worked hard and did everything I could to make it a reality. Now, five years later, I can successfully say that I feel at home here and everything is starting to fall into place.”

Shugars' initial job search yielded what he believed would be a perfect fit at a major Hollywood studio. He had aced the interview and received a job offer, only to learn a few days later that the position had been eliminated. But Shugars was undeterred by this setback. Determined to reach his goals, he doubled down on his job search.

Although trained in film and video production, Shugars found that after a year in Los Angeles, it was publicity positions that were coming his way. Although he credits his outgoing personality as being a key factor, he also states that it was his willingness to learn on the job and his proven dedication to the task at hand, which helped move his career in the direction of public relations.

“During my interview I explained my education, my goals, and my experiences, and although I had no public relations background, I was committed to the job and learning everything from the ground up. I think being honest about who I was and outlining my experiences and dedication to everything I've ever done in my life really helped me in getting the job,” he said.

Advice from the trenches

Through recounting his own personal journey and struggles, Shugars offered the Penn State Schuylkill students in attendance at his talk some valuable career advice for when beginning a job search.

First, networking. When his initial job search didn’t yield the results that he expected, Shugars reached out to the Penn State Alumni Association for help. He used LinkedIn to find other Penn State alumni who lived in Los Angeles and worked in the entertainment industry, and he used the power of that network to help develop a few job leads.

Second, personalize. Shugars talked about the importance of tailoring a resume to be job-specific to stand out. As many companies now use software to select candidates through a keyword search, Shugars suggests pulling specific keywords from the job notice and incorporating them in the resume.

Third, internships. Shugars used a postgraduate internship at Mandalay Pictures to help him hone in on the right job. Originally trained in film production work, it was his internship experiences that helped put Shugars on the right career path.

Shugars is an excellent example of how determination can turn opportunity into reality. When asked where he sees himself in five years, Shugars, who just recently received a promotion from executive assistant to apprentice publicist, said, “In five years, it hopefully will be time for another promotion.”

Nick Shugars shares a few job search principles that he lives by and often shares with new job searchers.