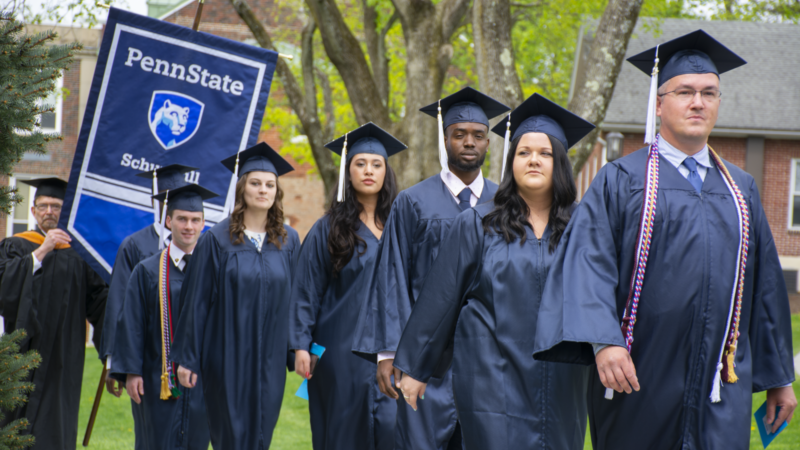 Interim Chancellor Dr. Darcy Medica noted in her remarks that many of the day’s graduates would continue their education in graduate or medical school while others would pursue additional degrees on the Schuylkill campus or another institution. Some were still working on the details of their next steps, and others had accepted positions with NASA, Lockheed Martin, the Air Force, police academies and county courthouses.

The enthusiastic family and friends of the graduates cheered on in support of the newly minted cohort of students who would soon turn the proverbial tassels of their mortarboards to the left as they joined the more than 700,000 Penn State alumni.

“Take the opportunity right now to feel good about yourself and breathe in the moment. You earned it.” So began the keynote address of speaker John Hart.

Hart, whose hometown is nearby Saint Clair, Pennsylvania, attended Penn State Schuylkill prior to completing a degree in medical technology from University Park. He recently retired from an illustrious, three-decade career with Lehigh Valley Health Network (LVHN).

He framed his address around five focal points: heroes and mentors, education and learning, work. and life. Among his heroes in his early years were the incomparable Mohamed Ali, world-class track star Jim Ryun and famed astronomer Carl Sagan. Ali’s practice camp, Deer Lake, is located approximately five miles from the Schuylkill campus.

Hart shared that what you could learn from your bank of heroes is boundless. He encouraged the graduates to take on new heroes as life progresses. He suggested that the graduates “mimic the desirable traits” of their heroes, reminding the audience that Saquon Barkley wanted to quit football in middle school and that Michael Jordan was cut from his high school basketball team.

Hart also mused that mentors are an important step in life in terms of work and life improvement. “Find mentors who will be totally honest with you and provide feedback in each of the areas of your life.”

Alemany spoke about the challenge of identifying a meaningful quote to epitomize the message in her speech. During her speech, she said she had finally found it: “You miss 100 percent of the shots you don’t take.”

In his speech, Williams dedicated his diploma to his mother whom, he said, had served as his inspiration and insisted that “I always strive to do and be better, believe in myself, and, ultimately, never give up.” Williams’ mother, who was diagnosed with cancer in July 2017, was present in the audience when her son crossed the stage.

Reminding graduates to stay in touch with their classmates, Medica also asked that they remain true to the blue and white—their alma mater— as they were now part of a huge supportive network as Penn State graduates.

Medica quoted words often attributed to Mahatma Gandhi in her speech: “In a gentle way, you can shake the world.” Further reinforcing a message of living a life of contribution, compassion and consequence, she quoted poet and author Maya Angelou: “I’ve learned that you shouldn’t go through life with a catcher’s mitt on both hands. You need to be able to throw something back.” 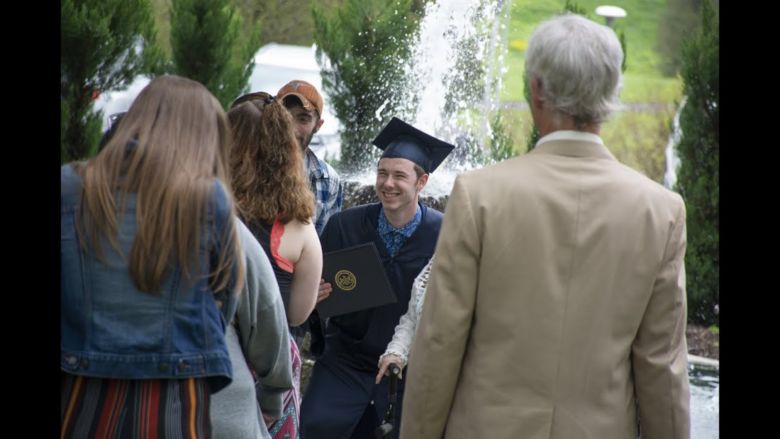