After nearly a year in planning, the Smithsonian's "Outbreak: Epidemics in a Connected World" opens on the Penn State Schuylkill campus.
By: Kim Mousseau

On the fourth of October, an unseasonably hot and humid night provided backdrop as the long-awaited Smithsonian’s National Museum of Natural History’s exhibit, “Outbreak: Epidemics in a Connected World” made its debut on the Penn State Schuylkill campus. The grand opening event marked the commencement of a three-month run of the exhibit hosted on campus and open to the general public. The evening was equal parts celebratory and educational, with prominent topic experts on hand to provide context and a deeper understanding of what this exhibition has to offer the casual viewer. 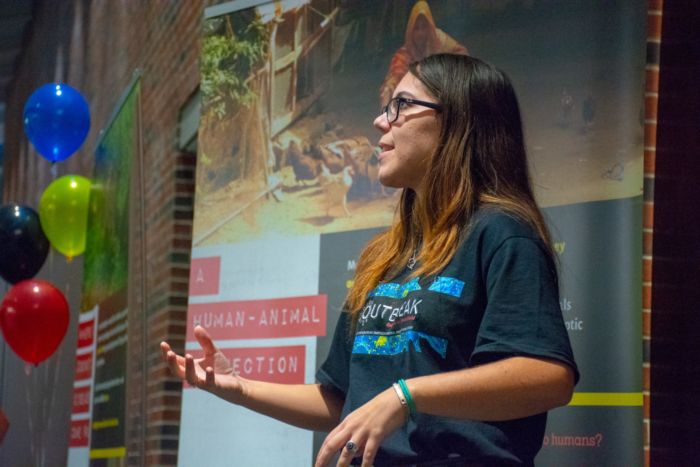 You Saw It Here First

Bringing the Outbreak exhibit to Penn State Schuylkill took nearly a year, made possible by the efforts of Brenna Traver, assistant professor of biology. Traver first learned of the “Outbreak: DIY” exhibit last January while visiting her colleague, Dr. Ashley Peery, who was then tasked with developing materials and training staff for the Smithsonian’s permanent exhibit. After being placed on a list for considered sites, “it was very easy to get ‘Outbreak: DIY’ here. The Smithsonian's intention was to make everything very easy to access for users,” explained Traver.

Penn State Schuylkill is one of the “Outbreak: DIY” inaugural locations. An additional 56 groups have hosted or plan to host this exhibition in locations as diverse as Bangkok, Yemen, Finland, Nepal and the Democratic Republic of Congo – an area currently battling an outbreak of the Ebola virus. The Smithsonian has made this free, print-on-demand exhibit available, in part, as a public service to spread awareness and educate communities in an effort to combat future pandemics.

While the exhibit will be installed on the main floor of the Ciletti Memorial library, the moveable exhibit was relocated to the newly-renovated Student Community Center lobby for the grand opening, which accommodated the crowd and breadth of the evening’s activities. Student tour guides were stationed at each panel to help direct visitors through the hierarchy of information and answer questions, before the crowd of over 150 was ushered into the auditorium for the lecture portion of the event.

Interim Chancellor, Darcy Medica, herself a trained biologist, took the stage first to welcome the audience to the campus and introduce the significance of this exhibit. She offered a hypothetical scenario describing the innocuous way a virus can travel and the vulnerability of a community to the spreading epidemic, illustrating the value this educational exhibit brings to the larger community. She also described conditions, later echoed by subsequent speakers, of a modern society that has contributed to the threat of outbreaks in many ways including: habitat destruction, species eradication, rapid global travel, and changing climates.

Medica then introduced Mr. William Reppy, president of the Lehigh Valley Hospital – Schuylkill, an exhibit co-sponsor. Reppy congratulated the organizers of the “Outbreak: DIY” exhibit and noted the significance, calling the efforts “a heavy lift.” Reppy closed his remarks with a well-timed message, urging audience members to get their flu shots.

Dr. Sharon Watkins, Director of the Bureau of Epidemiology at the Pennsylvania Department of Health, followed after a brief introduction by Traver.  Watkins admitted when she first learned about the exhibit she was excited, noting ‘outbreaks’ are her area of expertise.

She talked about recent public health scares, both here and abroad, reinforcing one of the primary themes of the exhibit – disease caused by bacteria and viruses is truly a global issue, as microorganisms do not recognize national or natural boundaries. So, the ongoing outbreak of Ebola in the Democratic Republic of the Congo, or the recent outbreak of Zika virus in Brazil should matter, even for those who reside in Pennsylvania. In fact, Pennsylvania was not immune to this recent Zika outbreak, with over 200 cases being diagnosed between 2015 and 2018. Watkins continued, “This is a reminder that difficult-to-control vectors, such as mosquitos, can become an explosive situation in this age of rapid global travel.”

Lyme disease, Hepatitis A, West Nile Virus and Ebola. Familiar pathogens and emergent diseases, new vectors and changing patterns of resistance all combine to make Watkins’ job what she describes, “a fluid and dynamic day-to-day ‘adventure.’” At this point, she directed her comments specifically to young learners in the audience, encouraging them to consider careers in public health. Citing an “exciting time” to be in public health, she listed the various job titles and roles, and encouraged students to explore the many internships, fellowships and job opportunities now available in the public health field. 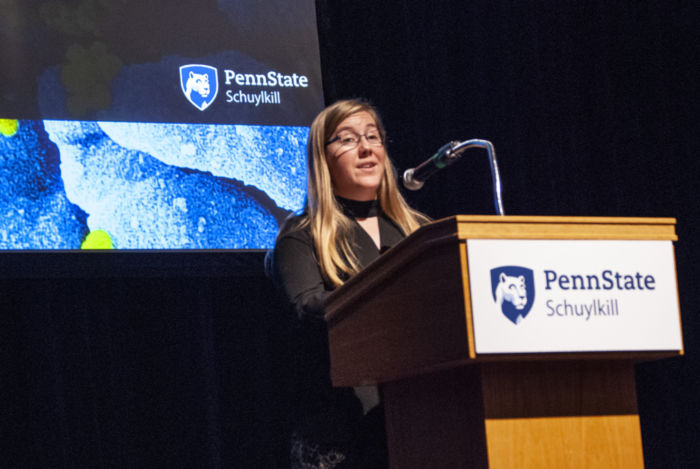 What Outbreak: DIY Can Do for You

Next to speak was Dr. Ashley Peery. Peery is a Public Outreach Fellow at the American Society of Microbiology, but it is her role as Educator at the Smithsonian National Museum of Natural History that most pointedly brought her to address the evening’s audience. Peery discussed the parameters of the original Outbreak exhibit at the Smithsonian, but conceded that the “Outbreak: DIY” exhibits may actually have a greater impact overall. Peery spoke of the flexibility and mobility of the DIY versions, their ability to go viral and reach global audiences that might not otherwise have an opportunity to access the information. Peery also suggests that the DIY exhibits can and should evolve to include pathogens that may be of interest to the communities where “Outbreak: DIY” is hosted.

Peery went on to note the wealth of activities planned over the next two months around the Penn State Schuylkill exhibit – talks by experts in the field, a play and panel discussion that links the exhibit to the 100 year anniversary of the Great Influenza epidemic in Schuylkill County, and the involvement of the student volunteer corps that will be leading the tours, activities and games for area school field trips and the general public.

“By reaching out to local high school students, you have an opportunity to inspire the next generation of scientists and public health workers in a way that is much more targeted than I can hope to do in D.C.” states Peery. “We at the museum are thrilled that Penn State Schuylkill is helping to spread the information of Outbreak to your community.”

“Outbreak:DIY” will be on display on the main floor of the Ciletti Memorial Library, Penn State Schuylkill, through December 21. The exhibit is open to the public during library hours and guided tours are available. For more information on the exhibit and how to schedule a tour, as well as a schedule of upcoming Outbreak events, please visit schuylkill.psu.edu/outbreak. 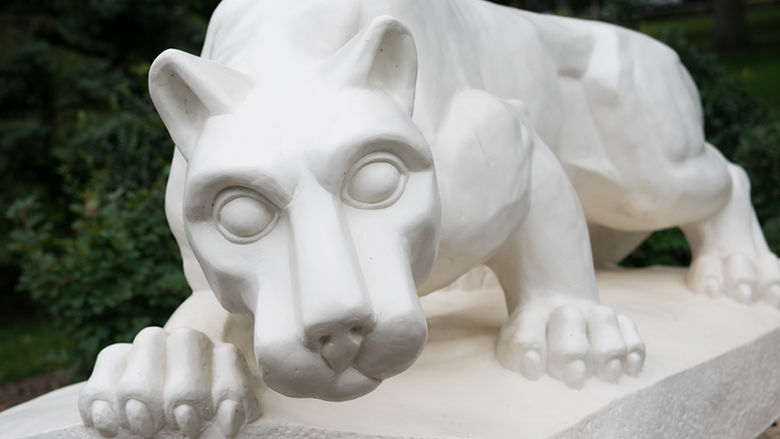 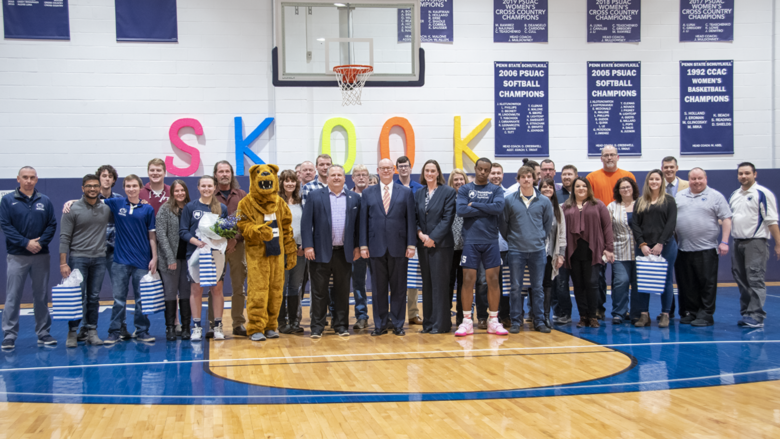 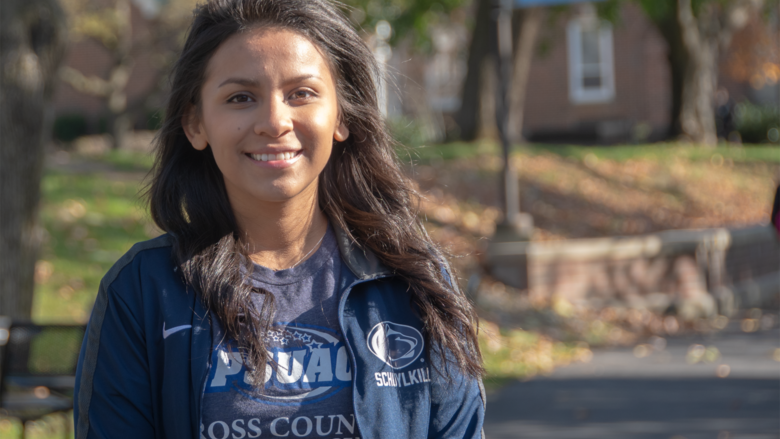