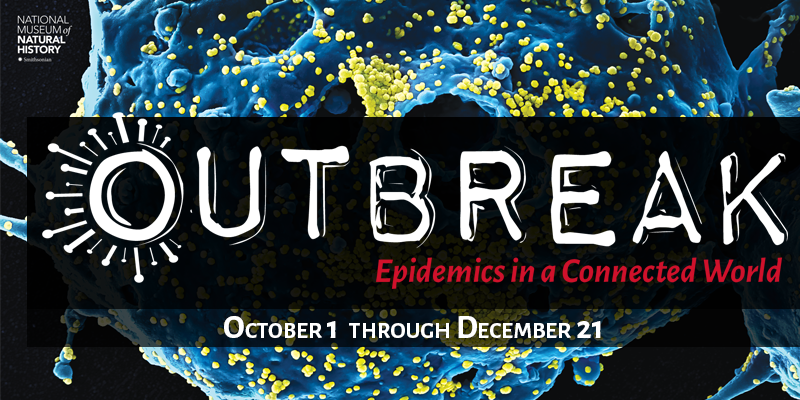 The Smithsonian National Museum of Natural History will feature a virus close-up (on the microscopic level). Penn State Schuylkill will host the new exhibit, “Outbreak: Epidemics in a Connected World,” for a three-month period beginning Oct. 1.

SCHUYLKILL HAVEN, Pa. — Penn State Schuylkill will host the new Smithsonian Exhibit, “Outbreak: Epidemics in a Connected World,” for a three-month period beginning Oct. 1. The Smithsonian’s exhibit exploring the origins of zoonotic disease and humans’ role in spreading animal-borne viruses will be available for a three-year period.

This year the Smithsonian’s National Museum of Natural History marks the 100th anniversary of the Great Influenza pandemic with this informative exhibition that examines the human ecology of epidemics. The Great Influenza decimated between 3 and 5 percent of the world’s population, or 50-100 million people.

The exhibit, according to the Smithsonian, will show how viruses can spread from animals to people, why some outbreaks become epidemics, and how people in different disciplines and countries are working together to eradicate diseases from the Nipah virus to SARS and HIV.

Kirk Johnson, the Sant Director of the National Museum of Natural History, said that increasingly the world has become interconnected by global travel, trade, technology and even viruses.

“Exploring pandemic risks in the ecological context is part of our mission as a museum to understand the natural world and the place of humans in it,” he said.

Darcy Medica, interim chancellor and a researcher of infectious disease biology at Penn State Schuylkill, said, “This type of exhibition is important to bring an awareness to the public of the very real dangers of pandemic diseases to humankind the world over. We are pleased to bring this significant and prestigious exhibition to Schuylkill County.”

Though the destruction to human life due to the Great Influenza was on a magnitude not seen since, recent times have demonstrated the potential of catastrophic loss, as with the 34 million deaths due to HIV/AIDS since 1980 and another 39 million currently living with the disease.

The Smithsonian created “Outbreak” to highlight current-day, infectious-disease epidemics, such as Ebola in West Africa and other viral pathogens such as Zika and yellow fever, as a result of various factors, including land-use change, urbanization and industrialized food production that have ramifications for communities, societies and the global population. To this end, Sabrina Sholts, lead curator of the exhibition and curator in the National Museum of Natural History’s Department of Anthropology said, “Understanding how we can prevent zoonotic viruses like Ebola, Zika and influenza from emerging and quickly spreading around the world — recognizing that human, animal and environmental health are connected as ‘One Health’ — is a critical science lesson for the 21st century.”

Brenna Traver, assistant professor of biology at Penn State Schuylkill said that "the ‘Outbreak’ exhibit will provide a remarkable opportunity to educate and engage with both students and community members on the 'One Health' theme. Hosting an exhibit on such an important public health topic helps to bring more awareness of the issue and can also can dispel any incorrect assumptions related to diseases."

Penn State Schuylkill is planning various public events aimed at educating those in Schuylkill County and beyond with its “Outbreak” exhibition, which is one of dozens of exhibits taking place nationwide this year while the main exhibit remains on display at the Smithsonian’s National Museum of Natural History for the next three years. With this exhibition, Penn State Schuylkill joins an exciting global conversation and public education initiative.

To schedule a group visit to the “Outbreak” exhibition at Penn State Schuylkill, contact Mariann at 570-385-6209.