Future engineer certain to rock the world and transform lives 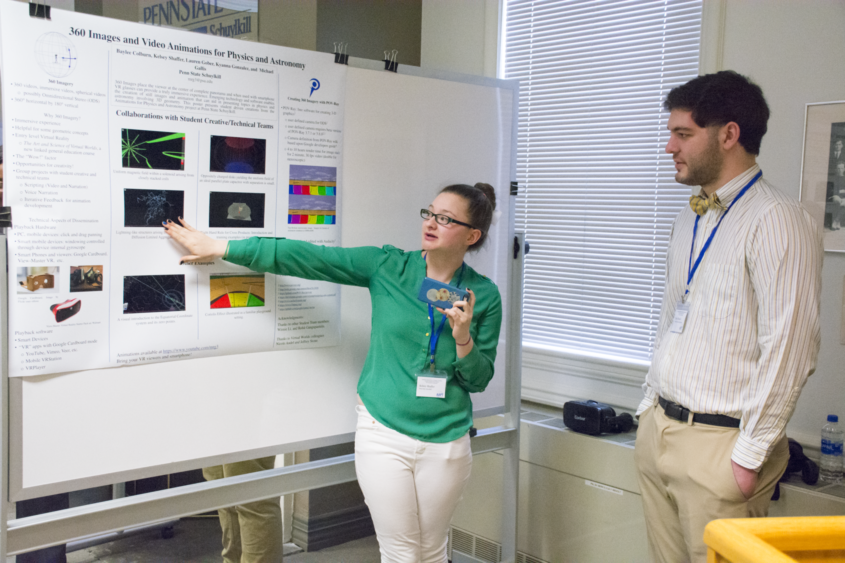 During a research poster session at a Physics Conference, Kelsey Shaffer demonstrates a lightning fractal effect in 3D by using a smartphone.

“Some students you just know will find a way to be successful,” said Robin Welsh, academic adviser, Division of Undergraduate Studies and Academic Advising at Penn State Schuylkill. “She was motivated and eager from the beginning and spoke to me about her plans to double major in mechanical and nuclear engineering.”

The “she” referenced by Welsh is Kelsey Shaffer from Hellertown, Pennsylvania.

In high school, Shaffer was proud of her first AutoCad project, which resulted in a 3D locomotive that she, along with a small team of classmates, printed out and assembled.

After getting a taste of engineering on a small scale, Shaffer was pleased to see that both nuclear and mechanical engineering degrees were offered at Penn State. She was drawn to the Schuylkill campus by the quality of a Penn State education and its great value in terms of tuition and room and board costs.

She also decided to participate in the University’s 2+2 degree plan—two years on the Schuylkill campus and two years at another Penn State campus.

This spring Shaffer completed her second year at Penn State Schuylkill and will continue her dual major at the University Park campus in the fall.

From a military family, Shaffer, a member of the Army National Guard, completed basic and AIT (Advanced Individualized Training) along with monthly weekend drills. “The professors at Schuylkill were very understanding of my commitment, which also included two solid weeks of annual training.”

The president of Penn State Schuylkill’s Engineering Club, Shaffer demonstrated strong leadership capabilities on campus. The club’s faculty adviser and Penn State Schuylkill engineering lecturer Greg Katucki said, “Kelsey approaches her coursework with passion and dedication and has the ability to look at problems in unique ways. I’m certain Kelsey is going to rock the world and transform lives.”

Katucki presented Shaffer with the campus’ Engineering Award at the annual Honors Day program in April. The award is given to a student with at least second semester standing and who has excelled in the engineering and science courses required by his or her curriculum.

According to Shaffer the Engineering Club activities included helping other students with their classwork, including an e-design class in which students use a computer with AutoCad software and try to make a 3D object. “In another instance, we would try to figure out real-world problems in our dynamics class on how much poundage it would take to break an object.”

Continuing on the theme of Shaffer’s willingness to help other students and other admirable traits, Valerie Schrader, interim director of academic affairs and co-coordinator of Schuylkill campus’ Honors Program, shared, “Kelsey was a member of the Penn State Schuylkill Honors Program for two years, and she was my first Pathway to Success: Summer Start program (PASSS) work-study student. She is a very intelligent, hard-working student and she is always willing to help her friends and fellow honors students.”

Shaffer said that research is important to nuclear engineering and that she has an interest in making a difference in the field. A field in which she said was seeing a notable number of retirements.

Speaking to research at Schuylkill, she said, “I learned about and became fascinated with lightning fractals and studied what happens when a lightning bolt strikes the ground. The tree-like subject that comes out of it is the lightning effect. In a 3D model, you see at the molecular level what it is like in the middle of a lightning cloud,” she explained.

After Shaffer completes her undergraduate degree, she plans to pursue a master’s degree. “I would love to work for a company, no matter the size, that could benefit from my background, or perhaps the Department of Defense.” She added that she was open to working overseas.

The love of engineering also runs in her family. “My uncle is an architectural engineer and my little brother, also a Penn State student, is studying to become one.” Shaffer currently helps her uncle, who owns an architectural firm, lay down the preliminary design of homes through AutoCad. “Perhaps one day I will assist people in building their dream homes by designing unique floor plans. Move this room here, take out this wall, or make the in-ground swimming pool in this shape,” she speculated on how a future engineer-client discussion might transpire.

“Another uncle of mine works on the physics engineering side of things that includes nuclear engineering,” she said.

The love of math also runs in her family. “Math was one of my favorite classes at Schuylkill. The more complex the calculus problem, the more I enjoy solving it,” she emphasized.

Clearly, the sky is the limit for this dynamic force.