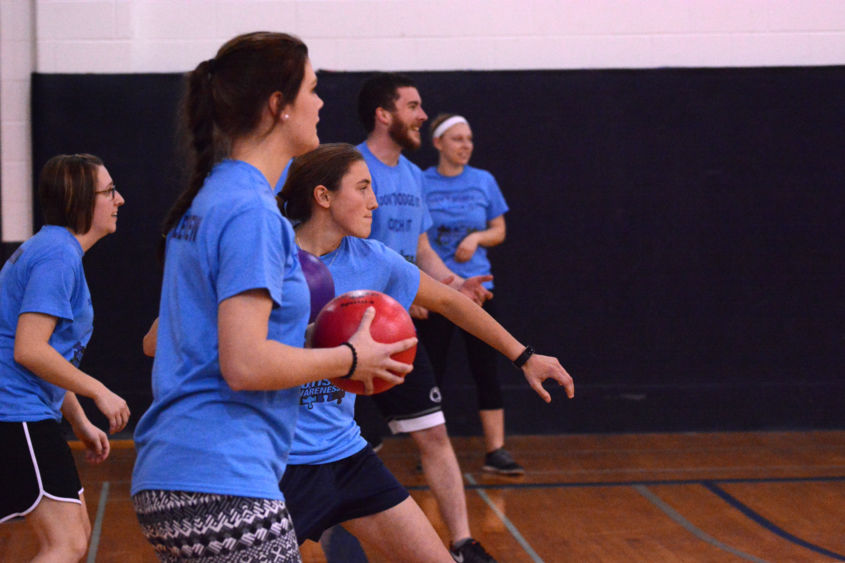 Penn State Schuylkill nursing students represent one of three campus teams to participate in the event.

SCHUYLKILL, Pa. — Approximately 200 people gathered on the floor of Penn State Schuylkill’s basketball court. They weren’t there awaiting a Kobe-like signature spin move, but rather packed the house to bring awareness to autism by participating in or watching dodgeball games. April, World Autism Awareness Month, marked the fifth such annual event hosted by Penn State Schuylkill in partnership with the Schuylkill County Autism Society (SCAS) and NHS Schuylkill Mountain Center.

Twenty-seven teams, including three Penn State Schuylkill student teams, composed of six to eight players lit up the court from 6 p.m. to 9:30 p.m. on April 7. The players ranged in age from 12 years old to senior citizens; they proudly designed and donned tee shirts with a variety of creative images and text. The teams signed up to compete in one of three categories: competitive, just for fun, and kids under 14.

The Crimson Wave from Pottsville won in the competitive category; the Playful Plaza Platypuses from NHS Schuylkill Mountain Center were the victors for just for fun; and the Haven Squad won for kids under 14. Melissa McGoey from the SCAS and NHS said, “We were pleased to see so many people from our community gathered in one place to celebrate and raise awareness for autism. Autism prevalence is still on the rise; our community needs to keep learning how to celebrate and support persons and families affected by autism.” She added, “We appreciate the time and effort expended by Penn State Schuylkill campus to host this important event for five consecutive years.”

Mindy Spolski, coordinator of counseling and student disabilities at the Schuylkill campus, said that the event was extremely successful in bringing awareness to autism in Schuylkill County. “The participants were fully engaged and enthusiastically supported the event and its purpose,” she said. She also praised the Schuylkill campus student volunteers who, she said, were very generous with their time and energy.

McGoey said that all proceeds from the event will benefit SCAS.