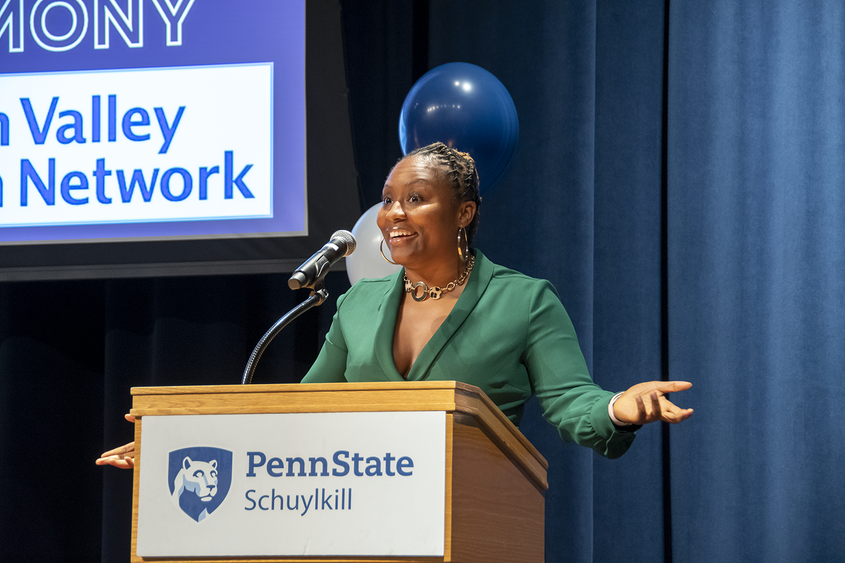 SCHUYLKILL HAVEN, Pa. — On Friday, May 6, Penn State Schuylkill recognized student-athlete achievement in a ceremony held in the John E. Morgan Auditorium. The inaugural event featured keynote speaker Natasha Camy, a former NCAA Division III athlete in the women’s basketball program at Widener University, who is now an NCAA Division I women’s basketball official. Camy shared her story and struggles with the audience and the lessons she has learned as she has earned a stellar reputation as a premier NCAA official.

The evening was dedicated to Penn State Schuylkill’s student-athletes whose character, efforts, service to team, and school spirit are notable as are their outstanding academic achievements.

Schuylkill athletes made a strong showing in the PSUAC All-Conference Awards, and this year, three coaches earned Coach of the Year honors across the entire conference in their respective sports. The women’s soccer team swept all of the major PSUAC awards, including Rookie of the Year, Defensive Player of the Year, and Player of the Year. And for the second year in a row, fourth-year student-athlete Jake Leininger was named PSUAC Player of the Year East in baseball.

Fifth-year student-athlete Alyssa Gerber is the first Penn State Schuylkill women’s basketball player to reach both 1,000 career points and 1,000 career rebounds. She is now the leading points scorer with 1,342 career points and this year’s PSUAC Player of the Year. Gerber's final season was the first time that women’s basketball celebrated 20-plus wins under Coach Charles Killian. A three-season athlete, Gerber also achieved 100 career hits in softball and was named to the PSUAC All-Decade Team in women’s soccer.

First-year women’s soccer player Ariana Trautz was both PSUAC Rookie of the Year and Player of the Year with a record-breaking 50 points and 24 goals. Trautz scored four goals in each of three games during the 2021 season, helping lead her team to the PSUAC championship game at University Park.

The Coach's Award is given annually to the student-athlete who demonstrates, throughout the season, the true spirit of Penn State athletics. It recognizes both effort and personal improvement, as well as the drive and willingness to learn and grow. This student-athlete fully participates in the program and shows a true partnership with the coaching staff and teammates.

The Lion’s Award recognizes individuals who promote sportsmanship, ethical play in competition, commitment to the team, and service to their community.

The MVP Award recognizes a student-athlete for their outstanding contributions to their team throughout the season.

PSUAC Coach of the Year

Female Scholar-Athlete of the Year

A biology major with a 3.97 GPA, Palacz has made the dean’s list in all five semesters of attendance.

Male Scholar-Athlete of the Year

A criminal justice major with a 3.99 GPA, Leininger has appeared on the dean’s list in all six semesters of attendance. 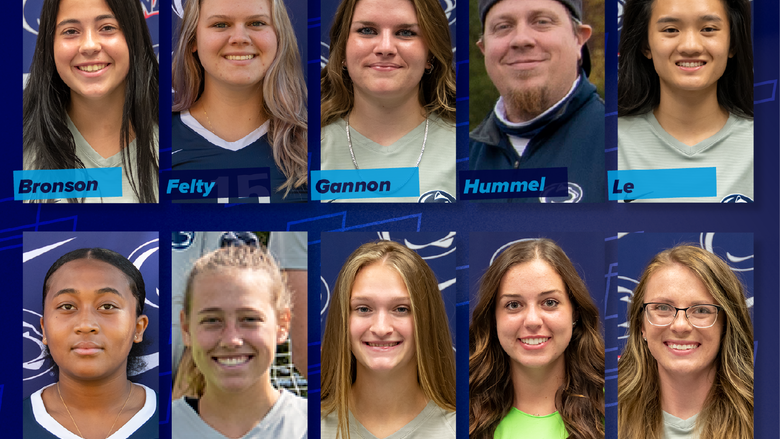