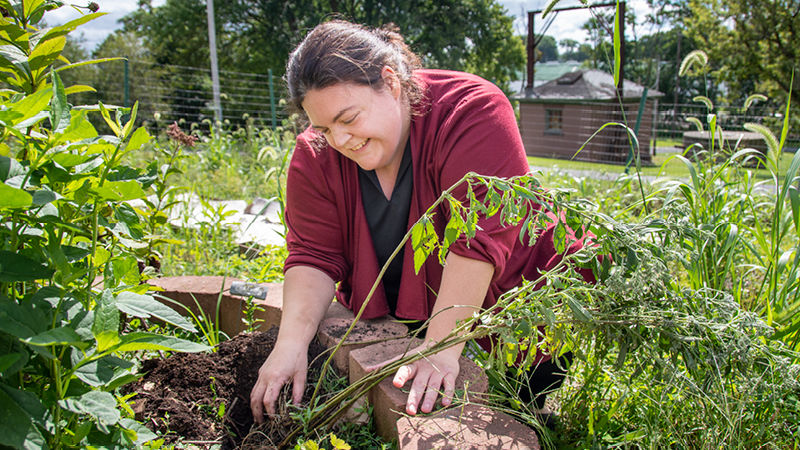 Mary Ann Smith, lecturer of biology at Penn State Schuylkill, has received grant funds to support and grow the native plant and pollinator population on campus.

SCHUYLKILL HAVEN, Pa. -- Penn State Schuylkill is on its way to becoming a Level I arboretum as a result of grant funding secured by Mary Ann Smith, lecturer of biology.

The campus will seek arboretum accreditation through ArbNet, a global community of arboreta. To become a Level I accredited arboretum, Penn State Schuylkill must develop an arboretum plan, establish an organizational or governance group, have volunteer support from the public, host at least one publicly accessible event per year, and — most importantly — be home to at least 25 species of woody plants.

Smith explains that there are at least 25 species of trees and shrubbery already on campus, and that she is looking to expand the native plant population, especially in terms of edibles. To bring these species to campus, she applied for a grant through the Pennsylvania Native Plant Society (PNPS), requesting funds for hazelnuts, American ginseng, high bush cranberry, American persimmon, elderberry, Northern bayberry, pawpaw, and more.

“Natives are not only better adapted to our climate and more resilient to climate change, but they’re also part of our ecosystem, which means other plants and animals in our region have evolved with those plants,” Smith noted as she explained the importance of native plants. “Having native plants helps support those other native populations, especially pollinators.” Smith continued to explain that many native bees in Pennsylvania only utilize certain plants, which impacts pollen cycles and native birds.

In 2016, Penn State Schuylkill’s community garden became a certified pollinator friendly garden through the work of Schuylkill Sustainability, and the plants brought to campus through this grant will help maintain that certification. But for Smith, the most crucial aspect of supporting native plants and pollinators is to help combat food insecurity for the campus community. “We’re utilizing edible landscaping, especially in the garden, so that students will have the option to visit the garden and pick fresh fruits and vegetables at any time.”

This project has been in the works since 2019, but was put on hold due to the pandemic. “We applied for the PNPS grant in 2020, and they said they loved the project, but told us to reapply for 2021 since we were largely working and learning remotely.” Smith revised the application to request funding for even more native plants and was informed her application was selected in April 2021.

To become a certified arboretum, Penn State Schuylkill must collect and maintain documentation of all tree and shrubbery species on campus. The Master Gardeners of Schuylkill County, operated by the Penn State Extension, have been assisting with this documentation, but Smith wants to get more students involved.

In many arboreta, metal plaques identify tree species, but Smith is seeking a more cost-effective and comprehensive way to identify species across campus using QR codes. “If we can hang or post a QR code on or near a species identified in our arboretum, we can include a lot more information about the species than we could through metal plaques,” she said. These QR codes will take visitors to information about the species, and that information may exist on the USDA and Penn State Extension websites or may be managed by Smith and students who collect and maintain this information. “These QR codes will be great for self-guided walks,” said Smith.

Students in Smith’s field ecology classes began collecting information on the campus’ trees and shrubbery in fall 2019, but more work needs to be done. “We’re hoping to apply for arboretum certification by the end of the fall semester, but we’re still working on labeling and documenting trees,” Smith explained. She will work with students and the Master Gardeners to attain GPS coordinates for the campus trees and include other information, like which plants are edible.

Smith is eager to get students involved in this most crucial part of the process. “We have tons of students in environmentally minded majors, and it sounds cool to say, ‘I’m studying in a certified arboretum.’”

Smith has already begun the purchasing process for the native plants that will contribute to Penn State Schuylkill’s certified arboretum status. She will acquire these new genera from Cold Stream Farm, a small native grower based in Michigan. “A lot of native plants in Pennsylvania are found from lower Virginia all the way up to Maine, so we can get access to these different populations of native species,” Smith said.

When selecting which species to bring to campus, Smith said she was inspired by the Lady Bird Johnson Wildflower Center and their list of Pennsylvania-recommended natives, and then refined the list using The Pennsylvania Flora Project of Morris Arboretum, whose website lists species native to individual counties across the state. She also used the USDA Plant Index to determine which plant populations this arboretum could help revive and which plants were once native, but no longer local.

These plants are sensitive to heat, and Cold Stream Farm will ship the order in late October or early November when average temperatures are cooler. Once the shipment arrives, Smith plans to involve students in getting the plants in the ground immediately.

As Smith works toward arboretum accreditation, she is also looking to her next project. “I’m looking into securing a medicinal plant grant,” Smith said, which will also consist of native plants. “Most native medicinal plants prefer a forested environment, so we’re going to look into where we would establish some of them. We’d like to remove invasive species and replace as many as possible with native ones.”

Smith said she strives for new ways to incorporate the campus environment into her courses as a learning tool and bring students into these projects. By making several of her courses more project-based, she sees benefits to students who often learn better through a hands-on approach. “I want them to be involved and to consider themselves as scientists,” Smith said. “I hope they’re getting to that point.”