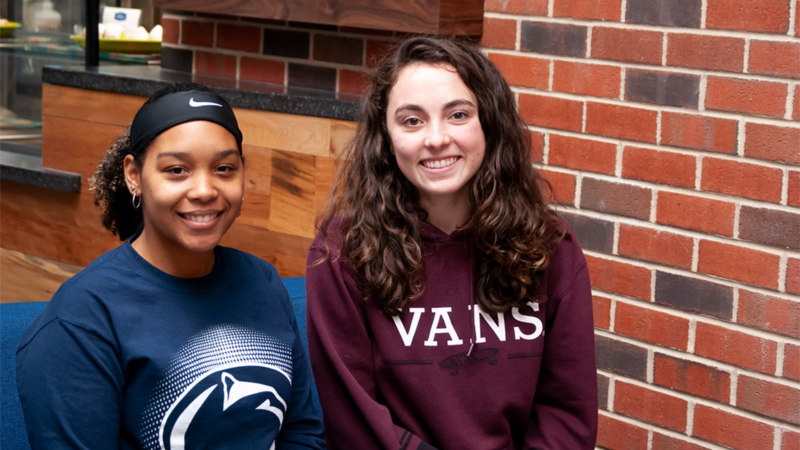 You can go home again

Essence Johnson and Brooke Hanzok returned to Schuylkill County to recommence their academic goals while forging a lasting friendship.
By: Kim Mousseau

For many high school students contemplating graduation, the anticipation of exercising newly-found independence is a powerful motivator to look beyond their local area when making higher education decisions. It’s a natural impulse for young adults who desire new experiences to seek out a new environment. For many aspiring undergrads who grew up in a college town, the hometown university is sometimes seen as a less discriminating choice and one often overlooked.

Best friends and Pottsville natives Brooke Hanzok and Essence Johnson experienced a similar circumstance while contemplating their own higher education options. Despite having a campus of one of the largest public university systems in their backyard, neither really gave much consideration to Penn State Schuylkill. In fact, they both suggest that it was never really presented as a compelling option. Like many local kids, neither had spent any significant time on the campus, and both made preparations to head further afield to study.

A sense of community

Hanzok enrolled at Cedar Crest College in Allentown to study psychology. After only one semester, she knew that it wasn’t the right place for her. With some other family issues at play she decided to move closer to home and found the psychology program at Penn State Schuylkill to her liking. When asked to compare her experience between the two campuses, Hanzok states, “at first I thought I didn’t like it [Cedar Crest] because it’s such a small school, but coming here…this is really small, [but] it doesn’t feel like a small school.” Hanzok suggests that while the reasons for transfer were complicated, once she arrived at Penn State Schuylkill, she was surprised to discover how much she loved it.

Johnson had spent three semesters studying psychology at Indiana University of Pennsylvania, when she decided that she wanted to live at home again. And, like Hanzok, she found she could continue her program of study at a world-class university right down the road from her family home. Although she enjoyed small class sizes at IUP, she never felt fully immersed in the collegiate experience. Soon after arriving on the Schuylkill campus she sensed a different level of communication and commitment.

“I feel the faculty cares more; it’s easier to get to know them. You aren’t just a number.”

Hanzok agrees. “After just a  semester, you get to know the other students and the faculty. There is more of a community here.”

Both Hanzok and Johnson were surprised at how easy the transfer process proved to be and point to the assistance they received from the Penn State Schulykill admissions team. Hanzok credits admissions counselor Travis Williams with not only helping her navigate the application process, but also regularly checking in to ensure that she is doing well and on track.

“Even to this day, he remembers me, and asks how I’m doing.”

Johnson and Hanzok agree that Schuylkill County high schools and local students should consider Penn State Schuylkill as not only a credible option, but a first-choice option.

“There is a stigma that is undeserved. It [Penn State Schuylkill] almost needs to be pushed more actively in local high schools…that it’s a serious choice,” states Hanzok.

When asked whether they anticipated finishing their undergraduate degree at Penn State Schuylkill, both Johnson and Hanzok answered affirmatively without hesitation. Not only did they hit upon an environment that satisfied their academic and personal requirements but they came full circle to discover a friendship that almost didn’t transpire. Although Johnson and Hanzok went to the same Pottsville high school, they weren’t acquaintances; their close-knit friendship began only after they met one another at Penn State Schuylkill.

For Johnson and Hanzok, their shared experiences at Penn State Schuylkill prove that not only can you go home again, but that ‘home’ can also be a place of new discoveries and notable successes.

If you’re a student interested in transferring, an adult student thinking about returning to school, or a high school student examining your higher education options, please visit the Penn State Schuylkill Admissions website for more information or contact them at [email protected].