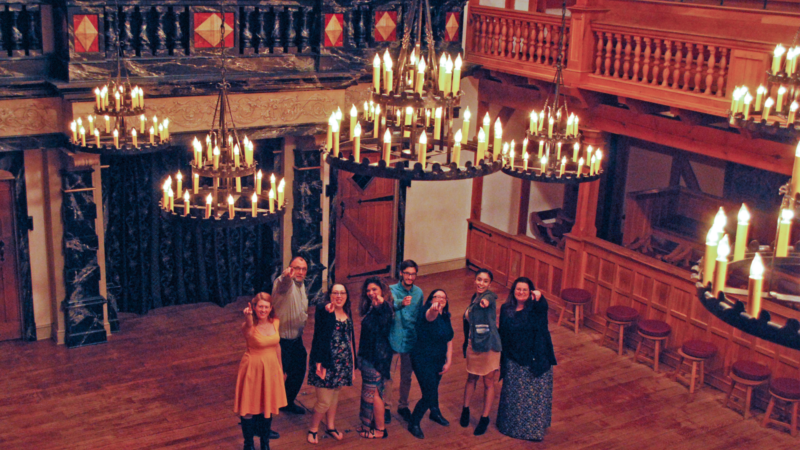 The Sound and the Fury—Out, Out, Brief Candle!—Double, Double Toil and Trouble

Do the words in this story’s title sound familiar? The words may not sound antiquated to you, but they have been bantered about for more than 400 years. And, yes, you have probably encountered them sprinkled within the famous works of authors throughout time.

These Shakespearean words and more were heard by Penn State Schuylkill students who journeyed to see “Macbeth,” one of the iconic bard’s most famous tragic plays.

But, let’s move on to “Words, Words, Words” as another famous Shakespeare character, Hamlet, said when asked what he read.

Christina Demoss enjoyed the play, but wished more attention was given to Lady Macbeth’s eventual all-consuming guilt. Her favorite line of the play belonged to Lady Macbeth as she convincingly said to her husband “…look like the innocent flower but be like the serpent under it.” (1.5.56-58).

Baker thought the actors effectively flip flopped gender roles. “One of the actors among the three playing a witch was a male,” she noted. “Back in Shakespeare’s time, all of the roles were played by males. In this rendition of “Macbeth,” a young boy was played by an actress.”

Petersen, who plans to be an astrophysicist, is currently enrolled in a Shakespeare class. He considers himself a novice polymath and points out that Shakespeare’s eternal relevance is due to his word choice. He cites the following as proof, “…and pity like a naked newborn babe, striding the blast, or heaven’s cherubim horsed upon the sightless couriers of the air, shall blow the horrid deed in every eye, that tears shall drown the wind. (1.7.19-25)

Achach found the actors’ ability to memorize the lines of four plays at any given time admirable. She also remarked that “Shakespeare demonstrated the power that many women have over men as Macbeth was persuaded by his wife to commit the evil deed.”

After the show, the students participated in a talkback with several members of the cast. Reiss asked one of the actors how the precisely executed sword fight was choreographed without anyone getting hurt.

“I have always wondered where the line “Double, double toil and trouble” (4.1.20-22) originated, and now I know it is the song of the witches in “Macbeth.”

Dr. Nikki Andel, associate teaching professor of English at Schuylkill, who also traveled to Virginia, said, “The best way to access Shakespeare is not through YouTube and film as they fail in comparison to the suspension of disbelief and visceral reactions to live performances.”

The students also enjoyed a tour of the theatre replete with a costume room, props, and ceiling and floor trap doors leading metaphorically to heaven and hell.

Dr. Michael Gallis, associate professor of physics and co-coordinator of the Honors Program, said that this was the first time he watched a live performance of a Shakespeare play. “I would love to see more Shakespearean plays as they reveal the history of our culture,” he said.

Click here to learn more about the Honors Program.