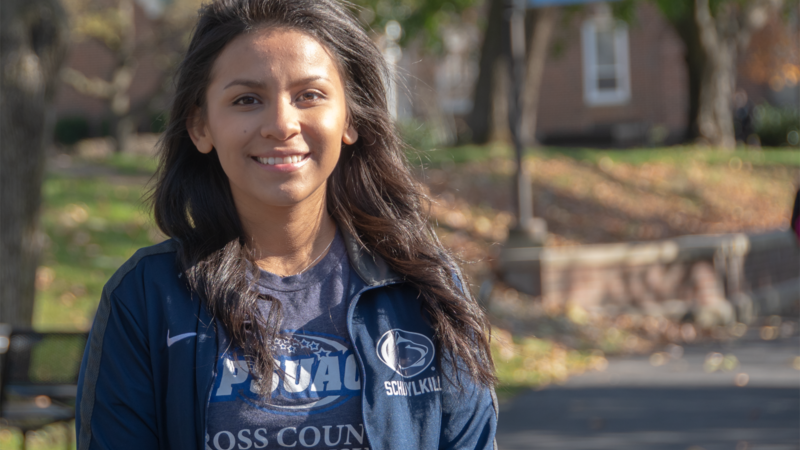 For her athletic efforts, academic excellence and community service, Melissa Ramirez is recognized as Student-Athlete of the Year, Women’s Cross Country.
By: Kim Mousseau

Due to her outstanding achievements on and off the course, Penn State Schuylkill’s Melissa Ramirez was named Student-Athlete of the Year in the United States Collegiate Athletic Association (USCAA) Women’s Cross Country division.

Ramirez is an honors student and campus leader, a tutor in the Academic Resource Center, a member of the Health Care Professionals Club and historian for Beta Beta Beta – the campus chapter of the National Biological Honor Society, Theta Chi Theta.

Additionally, Ramirez is engaged in service to her community – she is a member of the campus Community Service Club​​​​​​, co-fundraising chair for Penn State Schuylkill Benefiting THON™, and last year wrote and directed a community service project that helped bring health care information to an underserved community in her hometown of Shenandoah, Pa.

The nominating committee of the USCAA noted that Ramirez’s well-balanced credentials, particularly in the area of community service, made her a stand out candidate for this honor.

This is Ramirez’s second season as a member of the Penn State Schuylkill women’s cross country team. She was a medalist at the 2018 PSUAC cross country finals and helped her team earn their third consecutive PSUAC Championship in 2019.

“Being a part of the Penn State Schuylkill cross country team has been an undeniably challenging yet rewarding experience,” said Ramirez. “Two years ago, I joined a family of hard-working student-athletes. They have each inspired me to become the runner I am today, and I would have never reached this point in my running career if it weren’t for the encouragement of Coach Muldowney. In my four years of running, I have never met a coach that has been so proactive and invested in a team. And for that reason, we were able to bring home yet another PSUAC Championship for the women’s team.”

This year the team received an invitation – by selection – to compete in their first National Association of Intercollegiate Athletics (NAIA) Conference Championship in Lawrence, Kan. While the team placed fifth overall in the Association of Independent Institutions conference, Ramirez was again recognized, this time by the NAIA, with its Champions of Character Award at the conference invitational.

“[She] has been a member of the Penn State Schuylkill women's cross country team for the past two seasons. Throughout that time, she has established herself as an outstanding runner as well as a team leader,” Muldowney said. “Melissa trains hard and encourages her teammates to do so as well. Melissa is a fine runner, but she is an even finer human being, who will succeed at whatever career path she chooses.”

Ramirez will graduate in May 2020 and plans to take a year off while applying to medical schools. Of her time as a member of this successful team, Ramirez says, “All in all, Penn State Schuylkill cross country has become an integral part of my undergraduate career. I will treasure this team for years to come and the lifelong lessons learned.”