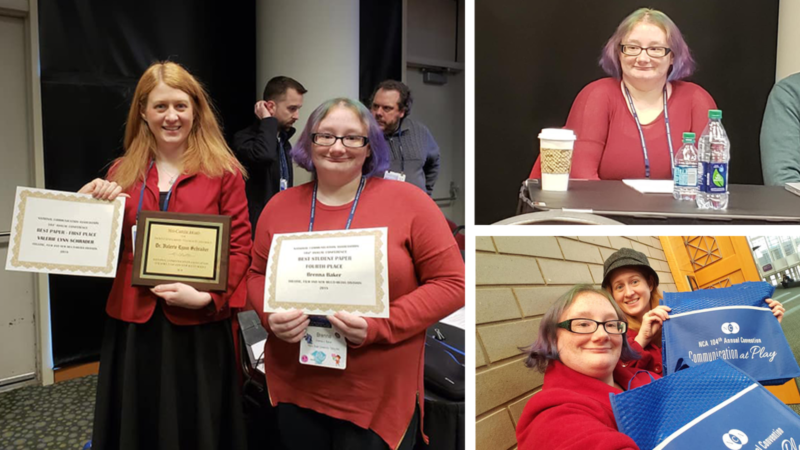 Home is Where the Art Is

From her home base in the Honors Program housing complex, Valerie Schrader contributes to her students' success through mentoring and leading by example.
By: Kim Mousseau

Sometimes ‘home’ defines a sense of camaraderie or an affection of the heart rather than a specific location or dwelling. For Valerie Schrader, associate professor of communication arts and sciences, the word ‘home’ can be used to describe her association with the Theatre, Film, and New Multi-Media Division of the National Communication Association. NCA is one of the leading member organizations for communication professionals with interests in research and teaching. Since 2009, when one of Schrader’s student research papers was named the Top Student Paper of the Year, she has considered this division of NCA and its intimate and collegial membership, a place where she feels very much at ‘home.’

Over the years, Schrader has assumed an active role in this division of the NCA. She has regularly been recognized for her research work, as well as serving in the official capacity as secretary.

Each year NCA holds a convention to award individual efforts in communication research. Additionally, the Theatre, Film, and New Multi-Media Division bestows two special annual awards within their membership: The Mid-Career Award and the Lifetime Achievement Award. These are peer-to-peer honors awarded to those with significant contributions and notable achievements in the field of communication. This past summer Schrader was notified by former division chair Dr. John Soliday, that a unanimous vote had named her the 2018 recipient of the Mid-Career Award for artistic scholarship, teaching, and leadership. For those who know Schrader, this comes as no surprise.

“Dr. Schrader is a leader in her field, as demonstrated by her selection for this award. In addition, she has achieved “top paper” honors at local and national conferences in recent years. She is a superb scholar and has provided opportunities for our students to participate in research and present at local and national conferences, where they have also achieved top student awards. Penn State Schuylkill is fortunate and to have her as a member of our faculty.”

In 2018, the NCA convention was held in Salt Lake City, Utah, where Schrader received both the prestigious Mid-Career Award as well as an accolade for a research paper “'Who Lives, Who Dies, Who Tells Your Story?’: Narrative Theory, Public Memory and the Hit Musical Hamilton,” that was named the Overall Top Paper in her division. Penn State Schuylkill senior Brenna Baker joined Schrader in Salt Lake City when her paper “Finding ‘Something There’ through Burkean Identification: A Rhetorical Analysis of Disney’s Beauty and the Beast,” was ranked in the Top 5 Student Papers in the division. Baker's paper ultimately placed fourth and was the only submission on the panel authored by an undergraduate – all of the other ranked papers were submitted by graduate-level students. Baker is also the first Penn State Schuylkill student ever to have a submitted work accepted by the NCA.

Schrader attests, “Brenna is an outstanding rhetoric student. She has a unique ability to grasp communication theoretical concepts quickly and apply them to pop culture texts. Her paper at NCA was Brenna’s fifth professional conference presentation; she’s been attending and presenting her research at the Eastern Communication Association since she was a first-year.”

ECA: Another opportunity to shine

This spring will showcase another important communication conference when the Eastern Communication Association’s 110th Annual Convention opens on April 10, 2019, in Providence, Rhode Island. Schrader will be present as incoming chair for the Rhetoric and Public Address Interest Group and will be joined by Baker, as well as sophomores Sophia Monteiro and Lauren Gober who each had their paper submissions selected for a panel presentation.

Though acceptance rates for the Eastern Communication Association's James C. McCroskey and Virginia P. Richmond Undergraduate Scholars Conference have not yet been announced, Schrader reports that “in the past, there have been anywhere between 150 and 250 submissions each year, and the acceptance rate is typically 40-50%. Penn State Schuylkill students do significantly better than the average at this conference – I'd say our own acceptance rate is about 90% since I started taking students to this in 2011. Both last year and this year, every student who submitted work got in.”

It is worth noting that all three students are members in good standing of the Penn State Schuylkill Honors Program, an academic organization that Schrader co-chairs. The Honors Program continues to elevate student performance on the Schuylkill campus and that is no small part due to Schrader’s dedication to the program. The Honors Program is another place that Schrader calls ‘home’ with her campus office strategically located within the program’s special housing complex.

Schrader understands that mentoring is a big part of student success and introducing her students to these types of academic conferences provides them an opportunity to meet other scholars in the field and learn about different kinds of communication research. She knows that these experiences help set up students for successful outcomes as they explore post-graduate academic careers or prepare to enter the workforce.

Graduating senior Baker is currently in pursuit of her next academic endeavor and recently applied to four graduate schools – including the same combined MA and Ph.D. Communication Studies program at Ohio University that Schrader completed. Baker is currently weighing her options between Duquesne University and West Chester, and throughout the application and decision process, Schrader’s advice and example have proven to be invaluable assets.

If ‘home’ is a community where knowledge is grown and ideas take form, then Schrader, through her efforts as educator and mentor, has helped create that space on the Schuylkill campus. By fostering distinctiveness and instilling a sound foundation, she has helped provide her students with a strong sense of purpose and a ‘home’ from where they can move forward with confidence.

As John Cage said, “We carry our homes within us, which enables us to fly.”