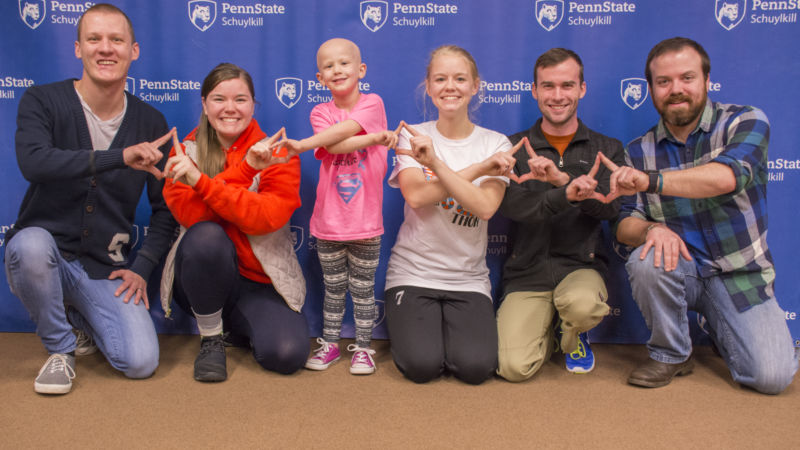 Dancing for the kids

Why does a different contingent of Penn State students dance non-stop for 46 hours every February?
They raise vital resources for the Four Diamonds Fund, an organization that assists children and families battling childhood cancer.  The fund serves to absorb all medical costs associated with treating the various types of the formidable disease.

This year four Penn State Schuylkill students will travel by bus to the University Park campus to dance the hours away: Marla Stoner, Matthew Williams, Alyssa Hatter and Duncan Noble. They all have their intrinsic reasons for participating in the dance marathon, but at the heart of each person’s decision is the desire to make an impact in the lives of others.

The journey will mark the first time that Williams, a dual major in international politics and digital journalism at Schuylkill, will experience the transformative nature of THON. “I have seen cancer touch those close to me many times, including a recent diagnosis of a very special person in my life—my mom,” he said. “I want to dance for the kids; and, in so doing, I also believe I will be dancing for her.”

The students earned their spots as dancers based on their speeches focusing on why they should be selected for the honor. Williams recalls writing an outline of talking points, but never taking the note out of his pocket. “The words have to come from the heart,” he explained. Feeling incredibly blessed and full of gratitude for the opportunity, he remarked that he would happily and proudly represent the campus to help the kids.

Junior biology major and Schuylkill’s THON president, Marla Stoner, dances for the kids and said that she dedicates her time, resources and sanity to THON. “I have attended THON, and I know the joy the kids and their families feel. I don’t want that taken away from them. Also, my brother joined THON as a sophomore, and I saw what a wonderful experience it was for him.”

According to biology major and Schuylkill’s THON vice president, Alyssa Hatter, when you come to campus, people tell you to join THON. “But you really don’t know what it is about until you attend, which I did my freshman year as one among a throng of students in the Bryce Jordan bleachers.” Emphasizing where the focus belongs, she added, “I THON for the kids, because it is their weekend.  They look forward to it all year.”

Duncan Noble, a pre-med student, said that on a personal level his grandmother had cancer three times and has beat it three times. “At first, I did not understand all there is to know about THON. I now understand it is about getting students involved who want to make an impact and take a stand against pediatric cancer. I have met some of my best friends as a result of participating in THON.” He believes that people can’t always have a big impact, but it adds up if enough people change the world in small ways.

Interim Chancellor of Penn State Schuylkill, Darcy Medica, said, “The students on our campus are committed to making a real difference in the world, demonstrating their drive and determination through outstanding organizations such as THON. Every year our students show us that they are the promise for a better future. They genuinely care about the kids and their families battling pediatric cancer, and continue to amaze our community with their passion, dedication and desire to enhance the lives of others.”

When Tina Rose, coordinator of career development in the Student Affairs Office arrived at Schuylkill in 2010, she became an advisor to THON—a group of five students that has increased through the years to as many as 55 members. “It’s difficult to explain the enormity and meaningfulness of the event if you are not present,” she said. “Being there puts life in perspective and makes you feel as if you are part of something much bigger than yourself.”

According to Rose, the Schuylkill campus has raised in excess of $200,000 through the years for THON.

As the organization grew, Rose needed assistance and called on Ron Kelly, instructor and program coordinator of administration of justice. “I could not say no as it is a truly meaningful cause. The first year I attended I took my children, and we all felt a strong emotional connection.”

Kelly commented that it’s a year of varied activities and events that builds anticipation for the culminating main event at University Park. “It’s indescribable in its magnitude to affect both the lives of the kids and their families and those assisting them in the great fight.”

Commending Penn State Schuylkill’s faculty, staff, students and alumni along with the local community, Kelly said that the success of THON is owed to all who continue to support this great cause through the years. “People feel good about doing good.”

The cohort of enthusiastic students agreed that failing and giving up is not an option. They are in it for the long haul—all 46 hours and, no doubt, throughout their lives.

The bubbly, good-natured five year-old child who has inspired Penn State Schuylkill all year long said, in her inspiring words, THON “will be great with lots of love and will be happy with smiles and big hearts.” Let’s put on our dancing shoes, and let’s dance—for the kids.

Penn State’s dance marathon, or “THON™,” is the largest student-run philanthropy in the world. Since 1977, students throughout the University have raised over $146 million dollars for the Four Diamonds Fund, an organization that assists children and families battling childhood cancer. The year-long fundraising initiative culminates in a 46-hour dance marathon held every February.

At Penn State Schuylkill, THON is the largest student group. Each year the group plans many fundraising activities and sends student dancers to the dance marathon.