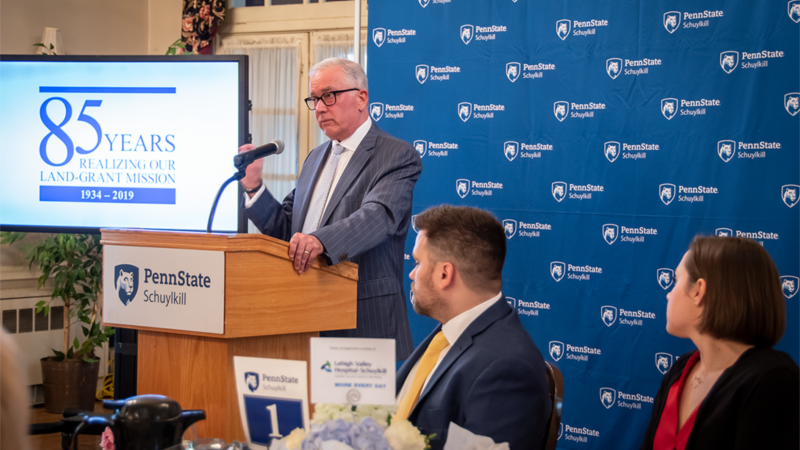 A Community of Interests

Penn State Schuylkill celebrates 85 years of its original land-grant mission and the enduring idea that higher education improves the lives of individuals and the communities where they live.
By: Kim Mousseau

Teaching, research, service. Three words, when used in combination, comprise a promise. The promise of Penn State’s original land-grant mission, to improve the lives and well-being of individuals and communities by providing access to affordable high-quality education, conducting and promoting research that improves people’s lives, and engaging with communities in order to make them better places to live.

In 2019, the Penn State Schuylkill community commemorates its 85th year of commitment to that original land-grant mission. While academic programming at the University has evolved over the years to include liberal arts and sciences and other programs that could not be envisioned in 1862 when the land-grant legislation was signed by Abraham Lincoln, the commitment to the core objective has remained unchanged. In honor of this celebratory milestone, Penn State Schuylkill is rethinking what it means to be a land-grant university in the 21st century.

On May 16, 2019, Penn State Schuylkill welcomed local business and civic leaders and university officials to the 85th Anniversary kick-off dinner – an event to benefit the general student scholarship fund. Over 150 generous donors and supporters of the Penn State Schuylkill campus gathered to celebrate the history and purpose of the Schuylkill Campus and recognize the vital role that it has in Schuylkill County. A theme that would be addressed throughout the evening – the necessity of higher education in a democratic society and how to ensure that it remains accessible to all who seek it.

The evening began with a cocktail hour sponsored by Evans Delivery Company and featured music by Pottsville’s M & J Jazz Combo – made possible by Catherine Zimmerman, in memory of William J. Zimmerman.

The value of higher education in a democratic society

Jones talked about the enduring history of the land-grant university concept and how it has been cited as a chief contributor to the continual expansive growth the United States has experienced beginning in the late 19th century. He spoke specifically to the development of the Penn State Schuylkill campus and the evolution of Penn State from a rural, agriculturally-focused institution to an internationally recognized powerhouse and top-tier university.

Jones articulated the critical need for a well-informed public and how higher education is one of the primary drivers to that goal.

“…nothing, nothing, is as important as having an educated and engaged citizenry,” said Jones.

“As one who has experienced both the best and basest that our society offers, I am here to tell you that if we do not afford our youth appropriate educational opportunities, if we tolerate the systemic dumbing down of portions of our society, and if we do not foster a better understanding of our rights and the issues of the day, we are jeopardizing our very democracy.”

Jones went on to describe the rising costs of tuition and the crushing debt that many graduates and their families bear. He suggested that on both macro and micro-levels this kind of debt is unsustainable. He suggested to those in attendance that their contributions to scholarship funds would help ensure that ‘worthy applicants’ to Penn State Schuylkill are able to avail themselves of the transformative opportunity of a Penn State education.

Jones was uncompromising in his appeal to the community’s support of scholarship funding, stating, “If we cannot find ways to make higher education more accessible and affordable, it will have dire socioeconomic consequences for our nation.”

“I know firsthand, the value of a Penn State education, and I have seen the positive resulting impact on families and communities,” said Masser. “I also know that my story is not unique…Today there are tens of thousands of students in Pennsylvania and beyond, who deserve the same chance to better their circumstances through higher education.”

Penn State Schuylkill Chancellor, Patrick Jones, expressed his gratitude to those in attendance saying, “through your generosity this evening and beyond, we are raising money for scholarships to help make Penn State Schuylkill even more affordable for more people. This will not only help individuals improve their lives, it will make our communities stronger by having a more-sophisticated workforce, an educated electorate, and an engaged citizenry. Our mission is a noble one, and I am grateful for your partnership in our efforts to serve our community.”

If you are interested in making a contribution to the Penn State Schuylkill scholarship fund in celebration of the 85th anniversary, please visit raise.psu.edu/schuylkill-85, or contact Eileen Kuperavage, Director of Campus Development at 570-385-6260 or [email protected].