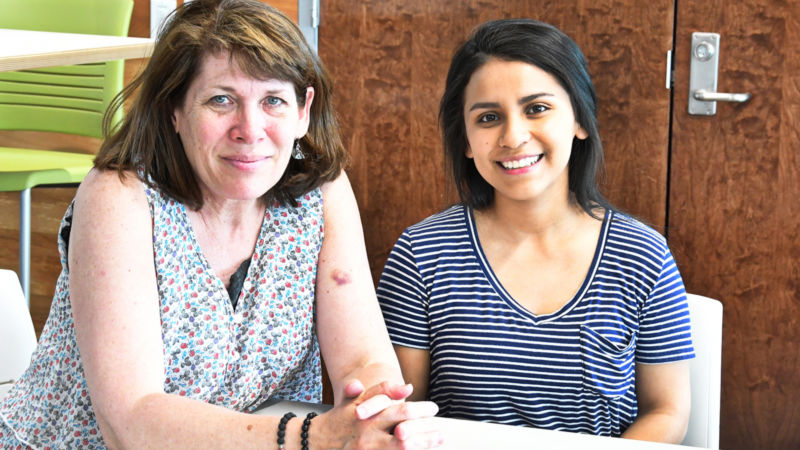 Through a chance meeting, Melissa Ramirez and Jeanne Elberfeld have joined forces to help deliver health information to an underserved community.
By: Kim Mousseau

Melissa Ramirez is a rising senior biology major at Penn State Schuylkill, with her eye on a career in medicine. She is also a lifelong member of the Divine Mercy Parish in Shenandoah, Pennsylvania, where she has been an altar server and active participant since early childhood.

Jeanne Elberfeld is the executive director of Schuylkill County VISION – an agency that, among other things, seeks to improve the quality of life for the residents of Schuylkill County through programming that focuses on health and education. She is also a primary care physician who left her medical practice years ago so that she could concentrate on what she came to believe was true preventative care; delivering information and resources to the communities and populations who need it most.

Crossed Paths
Last spring their paths converged when Elberfeld visited the Divine Mercy Parish to conduct a 'community health needs assessment' for Lehigh Valley Health Network in Shenandoah as part of the Healthy Schuylkill Communities outreach program. Shenandoah was identified by the Pennsylvania State Department of Health as one of the areas in Schuylkill County with high levels of obesity and chronic diseases like diabetes. Because Healthy Schuylkill Communities is built on a ‘community-based participatory research' model, going out into the community is a big part of Elberfeld’s job.

When Elberfeld struggled with how to communicate to the Spanish speaking congregation of Divine Mercy, then-parish nun Sister Vincent had a ready answer. “Missy can do it.” She was, of course, referring to Melissa Ramirez who stepped forward to not only translate for Elberfeld but to provide a conduit for access. Having conducted health needs assessments in other communities where she was lucky to have a handful of participants, with assistance from Ramirez, Elberfeld now had an engaged group of over 35 members eager to share their needs.

The meeting was so successful that Elberfeld suggested she and Ramirez partner in the future on some community health programming specific to the Spanish speaking population in Shenandoah. Ramirez was eager to participate. Initially, the idea was that the two would collaborate on a Spanish language health program, but it was Dr. Kelly Puzzi, Ramirez’s anatomy and physiology professor at Penn State Schuylkill who suggested that this would make a great independent study.

While Puzzi created a syllabus for the independent study, Ramirez worked with Elberfeld to outline the two initial program topics. However, Ramirez did all of her research and developed the presentation for both of the one-hour programs. “I would just review it to make sure it was medically credible and factual, and offer tweaks,” added Elberfeld.

As the program took form, the next step was determining when and where to offer it. “It was really hard to find a time where everyone was available,” said Ramirez, “we knew that Sundays were the hot days because we knew that everyone would show up after church.”

But utilizing the church’s meeting space proved a harder lift. “There was just too much red tape,” said Ramirez. So, she and Elberfeld started looking around for alternative locations. As a partner in the Healthy Shenandoah initiative, the Shenandoah Senior Living Center was eager to get involved and offered the use of their communal meeting room.

Delivering the Right Message
The two one-hour programs were presented last spring. The topics included cardiovascular health and nutrition. The program was presented entirely in Spanish by Ramirez, but Elberfeld was on hand to help answer medical questions as they arose.

However, it was Ramirez who held their attention.

“What I found incredible was the way they listened to her as an authority, she wasn’t just a kid from the neighborhood anymore,” said Elberfeld. “They really engaged with her in meaningful dialogue and she was able to deliver information to a population that had been unreachable.”

Both Elberfeld and Ramirez agree that it has been a learning process. “I have been enlightened through this process,” states Ramirez. “The need [for health care access] alone. I knew it existed, but not to the degree that I found.”

For many non-native English speakers, there is a perception that accessing health care has certain risks. Not only navigating the system in a second language without insurance coverage, but there are also perceived safety concerns. Elberfeld notes that some undocumented people fear they will face discrimination or retaliation. She is quick to dispel the notion that these are people looking for a free ride. She affirms that this is a very reliable population ready to accept the responsibility of payment for services but is often discouraged in a system so dominated by insurance companies. “There is a true access issue,” suggests Elberfeld, “part of it is language and part of it is cultural.”

Elberfeld is quick to credit Ramirez with the success of the program – citing her strong research skills and ability to communicate important concepts. She acknowledges that there is often an issue of trust as well as a language barrier when it comes to meaningful engagement in some of her targeted populations, but because Ramirez is part of the community, she can speak with an authenticity that allows her to convey valuable information.

Ramirez is already accessing her newfound influence with measurable results. While attending a community health fair last April she learned that a local clinic was using a new grant to fund free mammograms to women without insurance. “I helped introduce the idea of free mammograms to the women in the Hispanic community. And that was successful.”

While Ramirez is currently focused on studying for her MCAT (Medical College Admission Test) that she will take this summer, she is also thinking ahead to next semester and building on the momentum of the spring wellness programming. Although she and Elberfeld haven’t worked out the details, they are considering some topics including immunization, suicide prevention, and other mental health issues. Once again, they will use a community needs assessment based model to determine first what community needs are and then building a program around that.

“We haven’t discussed specifics, but I’d like to start planning another round of presentations for the fall, says Ramirez. “Hopefully, this is just getting started.”

Elberfeld also envisions the expansion of this program.

“We have a new board member who is a registered dietician and we would like to tap her for help with this project. I think this is going to grow as we move into next year.”

Elberfeld understands the importance of Ramirez’s contribution by acknowledging the limited time they have left.

“We want to do as many [programs] as we can before we lose her.”

But even with thoughts of heading off to grad school in a year, Ramirez is a hometown girl who may eventually come full circle to use her medical knowledge in the community where she grew up.

In light of Penn State Schuylkill’s 85th Anniversary re-commitment to its original land-grant mission of teaching, research and service, Ramirez is a great example of what that looks like for our students and our community in the 21st century.