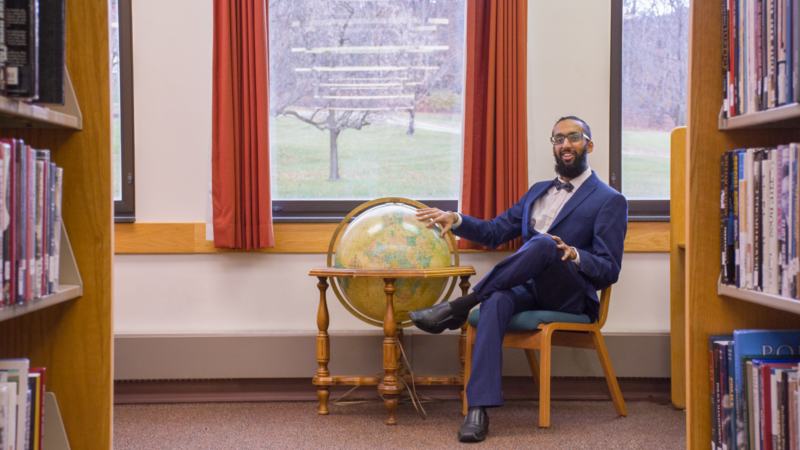 While attending Schuylkill, Harnoor knew he wanted to help people be healthy. Now, he's on his way to earning his doctorate.
By: Brenna Baker, student intern

“Transforming society by optimizing movement to improve the human experience.” That is the vision statement for the physical therapy profession according to the American Physical Therapy Association (APTA). Harnoor Singh, a former Schuylkill student standout, views a career in physical therapy as an opportunity to work in a medical field focused on preventing illness and injury: “Many other fields are concerned with post-illness treatment, and I want to help people build a foundation to stay healthy and avoid injuries.”

Singh is currently pursuing his doctorate in physical therapy and has an ambitious career path planned for his future. He intends to open a multi-practice center that focuses on overall health and wellness and uses a variety of different curative processes and activities to allow people to live a happier, healthier life. Singh commented, “I want to serve as a healer and physical therapy is one outlet where I can learn as much as possible to help people.” He attributes his successes thus far to his freshman year as an undergraduate student at Penn State Schuylkill.

Singh’s cousin gave him some advice before he went off to college: Make sure you stay after every class and ask at least one question. After his third time following this advice in the class of Dr. Rod Heisey, professor of biology, Singh found his educational experience changing when it was suggested that he join the Honors Program. “My whole perspective of what was possible was changed during my first semester as an undergraduate student. I was able to tap into my full potential at Penn State Schuylkill.”

From there, Singh became very involved in the campus community, taking advantage of the Honors Program, campus sustainability activities, THON and more. In addition to his notable extracurricular activities, Singh showed an admirable determination to succeed in his academic career. He took an impressive seven classes in his first semester as a freshman. Following his ambitious start, he completed a whopping 11 classes in the second semester.

Singh cited his friends and the supportive faculty as a large part of his astounding success during his first year as an undergraduate student, including Dr. Heisey, Dr. Lee Silverberg, associate professor of chemistry, and Dr. Darcy Medica, now interim chancellor of Penn State Schuylkill. In addition to their mentorship throughout his first year of college, Singh also noted that the faculty's support allowed him to travel abroad during the summer between his freshman and sophomore years.

He described this trip through Penn State's CHANCE program as an incredible experience that allowed him to work with experts in the rainforests of Costa Rica and Panama. Singh continued his undergraduate studies at Penn State University Park as a Schreyer Scholar. He graduated in 2017 with a degree in biology.

Singh has this advice for students aiming to graduate early or attend graduate school:  “Before you even think about graduate school, take the time to explore what you really want out of your undergraduate experience. Join clubs, participate in activities and take advantage of one-on-one experiences. Find a mentor; he or she will really have good advice."

In addition to his physical therapist studies, Singh is YES (Yoga Exercise Specialist) certified, and runs yoga and hip-hop classes in his community.